Why on earth are dangerous oil trains allowed anywhere near populated areas? It’s utterly insane. The latest example of what can happen is in Lynchburg, Virginia, where “[a] freight train owned by CSX Corporation has erupted in downtown Lynchburg, Virginia,” sending “‘flames stories high’ into the air, creating a large black cloud.” In addition, the RTD reports, the derailment has spilled “oil into the James River upstream from Richmond’s primary water supply.” Ugh.

P.S. Thankfully, this accident wasn’t as destructive as the Lac-Mégantic derailment on July 6, 2013, which destroyed roughly half the downtown area and killed nearly 50 people. Meanwhile, this is the second fossil fuel mess that’s threatened Virginians’ drinking water in the past few months, the other one being the coal ash spill in the Dan River.

“Deputy Secretary of Public Safety and Homeland Security Adam Thiel has been dispatched to the scene and will provide my team and me with constant updates as this situation unfolds. I have also spoken with Lynchburg Mayor Michael Gillette and offered him any and all resources he needs to respond to this incident and keep Virginians safe.”

I can’t even tell you how much this pisses me off. Earth to humanity: GET OFF OF FOSSIL FUELS NOW! 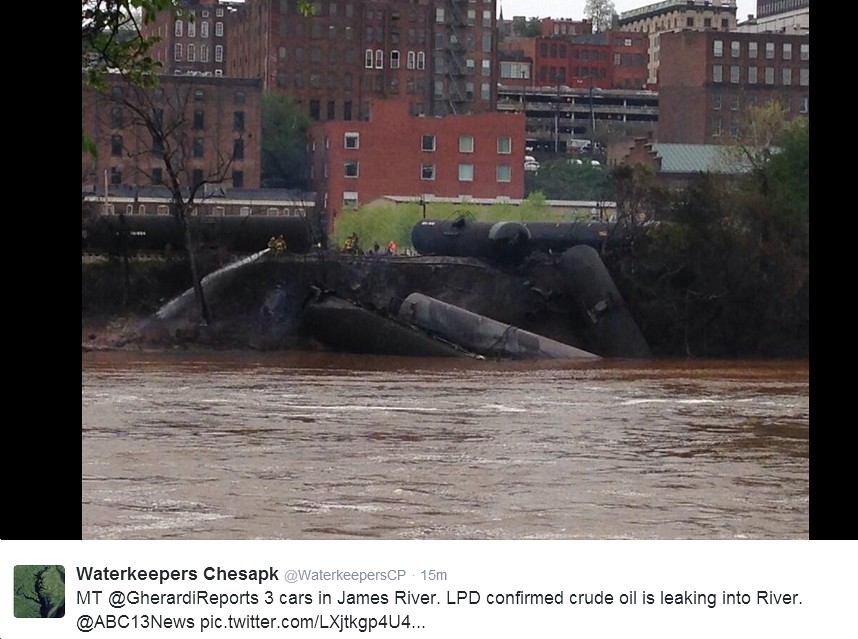