The room was packed with both DREAMers and those who’ve worked hard on this issue over the years – people Arlington County Board member Walter Tejada, State Senator Adam Ebbin, Delegate Alfonso Lopez, and Arlington County School Board member Emma Violand-Sanchez. All of these people, plus of course the Attorney General’s office, deserve a lot of credit for making this a reality. In addition, as I discussed with Emma Violand-Sanchez and Walter Tejada, a key lesson from today’s announcement is that elections matter. Don’t think your vote counts? Well, Mark Herring defeated Republican Mark Obenshain by just a few hundred votes, and the result is now a policy change that will help thousands if not tens of thousands of Virginians. If Obenshain had been elected AG, does anyone think we would have had a joyous ceremony like the on held a bit earlier today? Hint: NO!

HERRING ADVISES THAT VIRGINIA “DREAMERS” CAN QUALIFY FOR IN-STATE TUITION 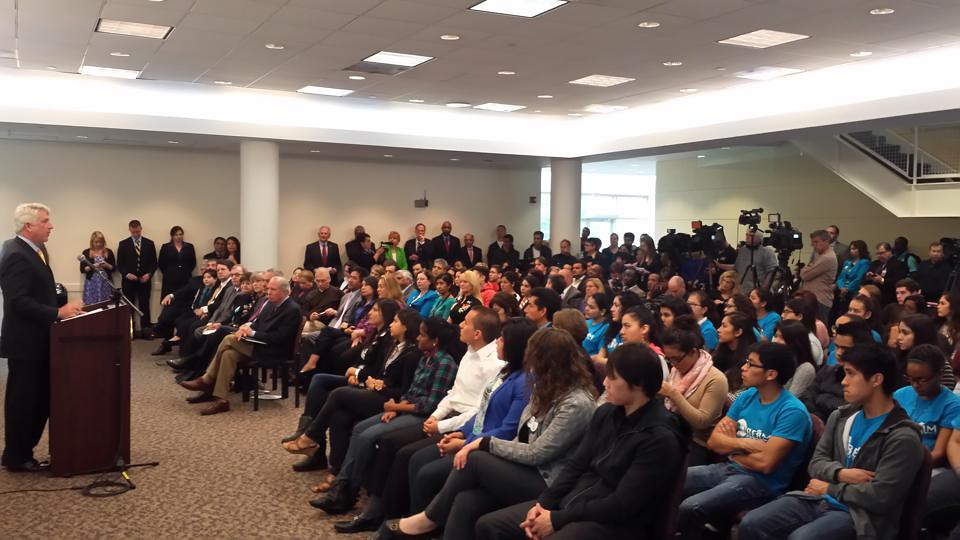 RICHMOND– In a letter sent this morning to the State Council of Higher Education for Virginia (SCHEV), the presidents of Virginia’s colleges and universities, and the chancellor of the Virginia Community College System, Attorney General Mark R. Herring advised that, under current Virginia law, Virginia students who are lawfully present in the United States under the Deferred Action for Childhood Arrivals (DACA) program qualify for in-state tuition, provided they meet Virginia’s domicile requirements. These students, often called “DREAMers,” will still need to gain admission to an institution of higher education, maintain their DACA status, and meet the same domicile requirements as all other students, but the Attorney General has concluded that state law allows the Commonwealth to offer these young people in-state tuition rates that will help them reach their full potential and maximize their contributions to Virginia’s economy, instead of minimizing their opportunities.

“If the Commonwealth is to remain competitive in a global economy, we must embrace a strategy that maximizes our talent pool and helps all Virginians reach their full potential,” said Attorney General Herring. “These ‘DREAMers’ are already Virginians in some very important ways. In most cases they were raised here, they graduated from Virginia schools, and they have known no home but Virginia. They might be the valedictorian or salutatorian of their high school, but because they were brought here as children many years ago, an affordable education remains out of their reach. Instead of punishing and placing limits on these smart, talented, hard-working young people, Virginia should extend them an opportunity for an affordable education. It’s what the law requires, it makes economic sense for Virginia, and it’s the right thing to do.”

Nineteen states, including Texas, New Mexico, California, and Oklahoma have enacted some form of tuition equity at their public colleges and universities, speaking to its importance as an economic and competitiveness issue. For example, Maryland has seen an increase in graduation rates among Latino students since enacting tuition equity and state officials believe it is because students who may have once dropped out are now completing high school because they see realistic options for continuing education.

As of December 2013, approximately 8,100 young people in Virginia have had their applications for DACA approved. In order to qualify for in-state tuition, these Virginia students will have to satisfy several requirements. First, he or she must first be approved for DACA status, a process which sets rigorous standards to identify young people who arrived as children, had no say in their arrival process, and are now Virginians for all practical purposes. These qualifications include age of arrival, length of residency in the United States, and important indicators of civic engagement, such as no criminal record,  enrollment in school or graduation from a high school, receipt of a GED, or honorable discharge from the U.S. Military. Nationally, approximately 75% of DACA applicants have resided in the United States for more than ten years and one-third were age five or younger at arrival.

Additionally, DACA students will have to be accepted by a Virginia college or university, just like any other Virginia student. Young people who are lawfully present in the United States because of DACA are currently eligible for admission to Virginia colleges, universities, and community colleges and this interpretation of the Virginia code will not change the admission process in any way.

Finally, all Virginia students, including DACA students, must prove they meet the Commonwealth’s standard of Virginia domicile, generally established by meeting criteria including, but not limited to, continuous residence in Virginia for at least one year, intent to remain in Virginia indefinitely, paying Virginia state income taxes, receipt of a driver’s license, employment in Virginia, ownership of property, or registration of a motor vehicle in Virginia.

This interpretation of the eligibility of DACA students for in-state tuition is similar to guidance given to public colleges and universities by then-Attorney General Bob McDonnell who advised that in-state tuition may be extended to persons in the United States under “Temporary Protected Status,” granted by U.S. Citizenship and Immigration Services to those who cannot safely return to their nation of origin.

“The Chamber and the Northern Virginia business community have supported the Virginia DREAM Act because all Virginia students should have the same opportunity to attend college and become productive members of the workforce,” said Jim Corcoran, president & CEO of the Fairfax County Chamber of Commerce. “We applaud the Attorney General and the legislators who have supported DACA (Deferred Action for Childhood Arrivals) and the Virginia DREAM Act and we wholeheartedly welcome today’s announcement.  This helps to ensure that Virginia businesses can recruit and retain top talent here in the Commonwealth.  In this ever-global economy, where businesses must compete on the world’s stage regularly, it makes sense for Virginia to cultivate and educate their own students, rather than turn them away when they reach college age.”

“One of the priorities of the Virginia Hispanic Chamber of Commerce (VAHCC) is developing a diverse and talented workforce to ensure the future economic vitality of Virginia,” says Michel Zajur, VAHCC President and CEO. “With Attorney General Herring’s recognition that DACA recipients are domiciled in Virginia, these talented students who gain admission to Virginia’s institutions of higher education now have the opportunity to remain in Virginia and contribute to our economy and workforce.”

“The actions by the Attorney General will allow DACA  students to pursue their dreams,” said Del. Tom Rust, who sponsored legislation in the General Assembly to help extend an affordable education to DACA students. “Most of these young people have been raised entirely in Virginia and attend Virginia schools.  They deserve the opportunity to participate as Virginians in our world class institutions of public higher education. I am pleased that the legislation I introduced during the previous two sessions brought appropriate attention to this matter.”

“I am extremely pleased that our Attorney General has determined that DACA students can be eligible for in-state tuition,” said Senator Donald McEachin, who carried a Senate bill for tuition equity. “As a Commonwealth, we want to ensure that all students who seek a higher education have a chance to attain it — partly to help them become contributing, productive members of our communities, and partly because hardworking students simply deserve that opportunity. I am pleased that the Attorney General has joined me and my colleagues in working on this issue, and I am delighted to see our shared effort come to fruition.”

“This is the right thing to do, not just from a moral perspective, but also from an economic development perspective,” said Delegate Alfonso Lopez. “We invest in these students from kindergarten through twelfth grade, but put up a barrier after graduation that only serves to drive away top talent from Virginia.  Seventeen states currently have provisions allowing for in-state tuition rates for undocumented students, including deep red States like Kansas, Nebraska, Texas, Oklahoma, and Utah.  These States understand that to nurture and educate undocumented students from elementary to high school only to turn them away when they reach higher education is not only a waste of money, but also great talent and potential. Education quickly pays for itself. It is a benefit to society, not just to those who go to school.  The Attorney General has taken an important and positive step in the right direction on the issue of tuition equity in Virginia.  His work to help these incredible students should be commended.”

“The importance of today’s decision regarding in-state tuition qualification for those eligible for Deferred Action for Childhood Arrivals (DACA) extends far beyond those who are immediately impacted,” said Dr. Robert G. Templin, president of Northern Virginia Community College. “It is a signal to all New Americans who live in Virginia that our state recognizes the importance of developing their talent for the benefit of all of Virginia, and values their potential contribution to our collective future.

“This is a historic day for our hard-working talented students and for those of us who have been fighting on their behalf,” said Walter Tejada, Arlington County Board Member. “As someone who has worked at the local, state, and national level on these issues, I am proud of the action Attorney General Herring has taken and appreciate his careful consideration and analysis of the law. This was not just the right thing to do for Virginia students who are among the best and the brightest, but it sends a message that our Commonwealth will do what is needed to remain a leader in the 21st century economy.  This is a big step forward for Virginia.”

“As an organizer for the undocumented immigrant movement, I have seen incredible potential become a shadow of what it could be due to a student’s inability to pay hefty out-of state tuition, in addition to having financial responsibilities at home and often having to work several jobs,” said Dayana Torres, president of Dreamers of Virginia and a Virginia student with DACA status currently attending George Mason University. “The Attorney General’s decision that DACA students can qualify for in-state tuition at Virginia universities is one that will motivate their academic excellence past high school and which will benefit the Commonwealth. I have witnessed our community’s determination through this fight for in-state tuition and we are very enthusiastic about Mark Herring’s decision which will allow us to pursue higher education. We will continue to persevere and to make Virginia proud.”