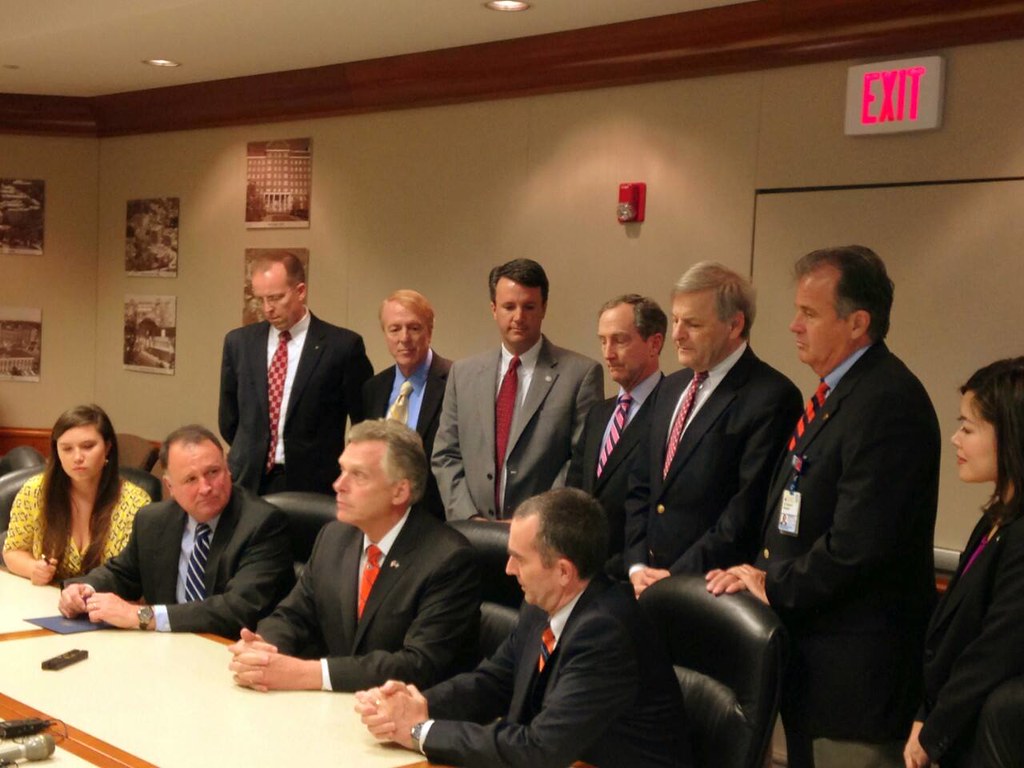 Here are a few national and Virginia news headlines, political and otherwise, for Tuesday, April 29. The photo is courtesy of Democratic House Leader David Toscano, who writes, “It was an honor to be with my friend and colleague Sen. Creigh Deeds, his daughter Rebecca Deeds, Gov. Terry McAuliffe, Lt. Gov Ralph Northam, HHR Dep. Sec. Jennifer Lee, along with my House colleagues, Dels. Rob Bell and Ben Cline, Senator George Barker, and UVA Medical Center CEO Ed Howell and Dr. Rick Shannon, VP for Health Affairs at UVA, for the signing of Creigh’s SB260, which extends the time allowed to find help for persons seeking mental health care and assistance in emergency situations, directs the establishment of a real-time bed registry and sets our state facility as the measure of last resort in emergency cases.”

*Outlook bleak for Democrats this fall, poll finds (Let’s all remember this headline, work to make it NOT come true in November, and then laugh about it over a beer. ;))

*The racists among us (“Let’s not pretend that deadbeat rancher Cliven Bundy and basketball team owner Donald Sterling are the last two racists in the United States. They have company.”)

*Conservatives Called Him A Democrat, But Sterling Is Registered Republican

*Fox News Tries And Fails To Get Any Details About The GOP’s Obamacare Replacement (Because there isn’t one.)

*Bill Kristol defends NBA owner: Don’t ‘go hysterical over two or three’ racist comments (Yet another leading Republican provides his enlightening – but not in the way he intended – opinion.)

*Governor helps Larry Sabato retire popular course (“Gov. Terry McAuliffe stopped by the University of Virginia on short notice Monday to honor Larry Sabato, head of the Center for Politics, who taught his popular Introduction to American Politics class for the last time.”)

*GOP leaders: Democrats ‘playing games’ with state budget (Up is down, hot is cold, left is right…Republican “logic.”)

*Lawmakers still at impasse over Medicaid expansion (In other news, the sun rises in the morning…)

*Silver Line deal’s real winner may be Bechtel (I’ve been saying this for many years, that “no-bid Bechtel” was the big winner in the Silver Line project.)

*Va. officials break ground on Route 1 widening project (Why are we still focused on widening roads in this country or building new ones, when we urgently need to be slashing fossil fuel consumption?)

*What needs to be done to finish the Silver Line? (“Elevators piston inspections, locks on rollup doors and speed readouts are among the issues that must be addressed before the Silver Line can open.”)