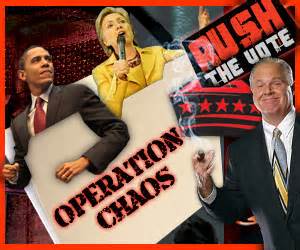 This is even funnier when you consider that Barbara Comstock lied about participating in Rush Limbaugh’s 2008 “Operation Chaos,” keeps changing her story, and generally can’t figure out a consistent narrative on why she voted for Barack Obama in the February 12, 2008 Democratic primary. Weird.

Despite Republican candidate Barbara Comstock’s example of meddling in the 2008 Democratic Presidential primary by voting for then-Senator Barack Obama, Chair Jackson vowed Monday that the 10th Congressional District committee would not advocate for such an effort, “I think its wrong, and I think its bad for the democratic process,” Jackson said.

Comstock’s vote for Obama in 2008 has drawn ire from many. Comstock notably claimed her motivation for casting a sabotage-vote in the primary was due to orders sent from radio entertainer Rush Limbaugh. [1]

On April 16th the Washington Post editorialized that “[b]eing a sycophant to Mr. Limbaugh is bad enough; it’s even worse when the sycophancy is based on a fabrication. (In response to our inquiries, Ms. Comstock acknowledges that her ‘recollection’ was flawed, and that her vote had nothing to do with Limbaugh).” [2]

Comstock’s Republican opponents in the primary smelled a lie and pounced, excoriating Comstock at the Purcellville GOP voter town hall. Comstock was absent from the debate.

Rob Wasinger, a onetime House staffer, paraphrased the notorious outburst by Representative Joe Wilson during President Barack Obama’s State of the Union address and shouted “Barbara: You lie!” for the benefit of the audience. [3]

Limbaugh’s “operation” would be difficult in the 10th CD GOP primary, acknowledged Chair Jackson: “Because the Republican committee has decided that a voter’s history of party loyalty will be investigated prior to being provided a ballot, people like Comstock will be forced to sign a ‘loyalty oath’ prior to voting in the primary.”

The “loyalty oath,” or “statement of intent” to support the eventual nominee is part of the vetting process before citizens will be allowed to participate in the closed GOP “firehouse primary.” [4]