Frank Wolf may have once been a “moderate,” reasonable, sane guy. But that time has long passed.  Evidence? Exhibit A: his obsession with Benghqazeeeee, the Teapublicans’ favorite conspiracy theory/manufactured outrage du jour. Now, Barbara Comstock – the Republican who hopes to succeed Wolf in Congress – is picking up Wolf’s “truther” torch. I suppose we shouldn’t be surprised, though, given that Comstock has been described as “almost unhinged” in her conspiracy theorizing and attempts to bring down the Clintons. Of course, she failed on that front, but that didn’t stop this “one-woman wrecking crew” before, and it certainly won’t in the future. Do 10th CD voters want a rabid, right-wing ideologue and Benghazeeee “truther” like Comstock in Congress? If so, why? 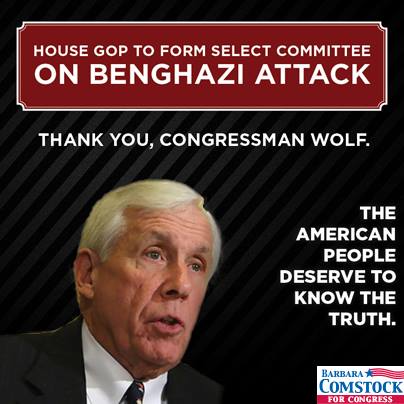