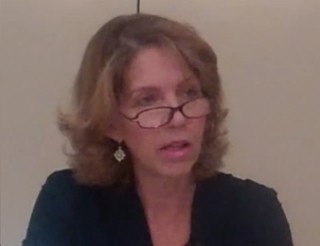 I was looking through today’s announcement from Gov. McAuliffe’s office of new appointments to his administration, and was thrilled to see my friend Lori Hanky Haas — Virginia State Director of The Coalition to Stop Gun Violence — being named to the State Crime Commission. For those who aren’t familiar with Lori Haas, here’s an article I wrote about her talk at a Coalition to Stop Gun Violence event in 2011. As I wrote at the time:

[Lori] got involved in the gun issue after her daughter, Emily, was wounded in the Virginia Tech shootings. As Haas describes in this video, she received a phone call on April 16, 2007, that no parent ever wants to get, as she heard her daughter tell her, “mommy, I’ve been shot.” Fortunately, Emily Haas survived — as her mother says, she was “very lucky that morning,” as 11 students and a professor in that classroom were murdered. Absolutely horrible.

In the aftermath of that terrible day, Lori Haas dedicated herself to remedying the “abysmal state of the gun laws in Virginia and in our country that make it far too easy for prohibited buyers like Cho [and] Loughner to get guns and wreak indescribable pain on far too many American families.” Here in Virginia, Haas and her allies have fought attempts to weaken the Commonwealth’s already weak gun laws. For instance, the gun lobby has been pushing for “universal concealed carry;” “repeal of one handgun a month;” expansion of the “shoot-first doctrine” (“would allow any person to use deadly force with a firearm to any perceived threat without any repercussions”); “restoration of firearm rights to the legally incompetent and mentally ill;” abolition of the Virginia Firearms Transaction Bureau (“the preeminent state background check system in the country, they say there’s no need for it”); and elevation of Second Amendment rights “above personal and private property rights.”

I emailed Lori to congratulate her and asked her if she had a statement on the record. She replied, “I’m honored to represent gun violence survivors in this important work and lend their voice to the efforts of public safety.” Which, again, is exactly what she’s been doing – tirelessly – since that terrible day in 2007. Thanks to Lori Haas for her continued efforts to make our state a safer place, and thanks to Gov. McAuliffe for appointing her to the State Crime Commission! No doubt, Virginia is a very different place these days than it was under the McDonnell/Cuccinelli administration, not to mention how awful it WOULD have been under – god forbid – Governor Cuccinelli. Yep, elections really do matter!

VA GOP Week in Review: Life, Liberty, and the Pursuit of Parking Spots