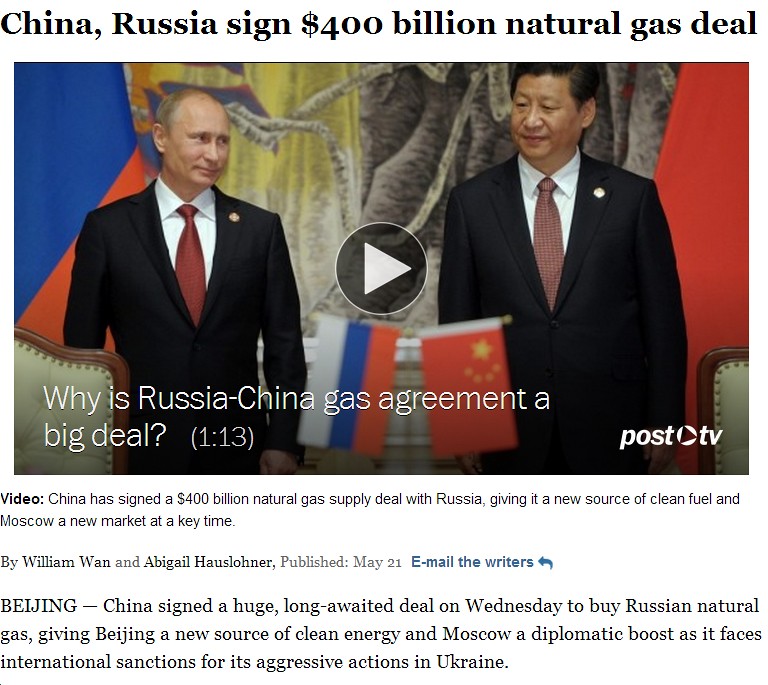 Honestly, nothing the corporate media does can possibly surprise me at this point. It’s just a giant cesspool of faulty “reporting” and mistakes of all kinds: false equivalency; focus on triviality and sensationalism while ignoring extremely important issues (e.g., climate change, by far the #1 threat to humanity); complete failure to cover stories (too many examples to mention); confusion and conflation between opinion, narrative and fact; etc.

So, yesterday, when I saw the front-page story China, Russia sign $400 billion natural gas deal, I braced myself for idiocy to ensue. Which it did, just 20 words into the story.

China signed a huge, long-awaited deal on Wednesday to buy Russian natural gas, giving Beijing a new source of clean energy and Moscow a diplomatic boost as it faces international sanctions for its aggressive actions in Ukraine.

Notice how they just slip that one in there, as if it’s a fact so obvious – something everyone just “knows” – that they don’t even have to explain it? But of course, natural gas is absolutely NOT clean, nor is it in any way straight reporting to say it is. Why not? Among other issues.

1. Natural gas is a carbon-based fuel. Although its carbon content is lower than coal’s and oil’s, thus making it less dirty than coal and oil, it still emits CO2 when combusted, thus contributing to global warming.

2. Natural gas is recovered through drilling, “fracking,” and other processes which are not in the least bit clean. Thus, as Dusty Horwitt of Earthworks explained several months ago in Arlington, fracking uses chemicals known to be “highly toxic,” while some of them are simply unknown, as the companies have not provided the information to the government. In addition, fracking waste water can contain both the chemicals injected into the well, as well as the naturally occurring water (“produced water”) that’s in the formation. The problem with the “produced water” is that the Marcellus Shale is naturally radioactive. The bottom line is that fracking the GW Natural Forest is “simply too risky for our watershed and our water supply.” And that’s the same around the country and the world, by the way.

3. There’s also the issue that in getting the gas out of the ground, there’s a lot of damage done to forests, streams and other ecosystems.

4. Then there’s the issue of methane leakage. One recent study found, “the drilling and production of natural gas can lead to leaks of methane, a greenhouse gas 30 times more potent than carbon dioxide,” and that “here is already about 50 percent more methane in the atmosphere than previously estimated by the Environmental Protection Agency, a signal that more methane is leaking from the natural gas production chain than previously thought.”

Bottom line: natural gas is in no way, shape or form “clean,” and it is wildly irresponsible “journalism” to say it is in a straight news article. The Post should correct the error immediately, but of course I’m not holding my breath that it will.