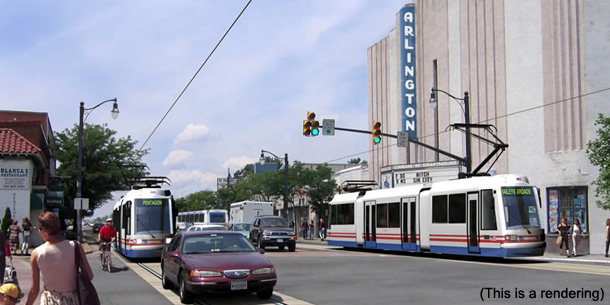 As the following press release (on the “flip”) indicates, calls for holding a referendum regarding Arlington’s Columbia Pike Streetcar appear to be growing. I had initially thought that there was almost no likelihood there would ever be a referendum, for at least two major reasons. First, in this strong “Dillon Rule” state of ours, an advisory referendum needs approval from the Virginia General Assembly, and that’s highly unlikely before November 2014. Another option would be to put the streetcar on the ballot this November as part of a bond package. The problem is that such a bond package would be necessary ONLY if general obligation bonds were being used, and that hasn’t been part of the streetcar financing discussion to date. But perhaps that’s what the Board will end up doing, assuming they can’t get state and/or federal funding lined up in short order.

In general, I’m not a fan of referenda as a method of governance. Neither, I’d point out, were our Founding Fathers, who specifically set up our system of government as a representative, federal system with checks and balances against the passions of the day, the majority over the minority, etc, etc. I’d also point to California’s disastrous “Proposition” system and to the popular vote approving anti-gay-marriage amendments in a bunch of states, including Virginia, as arguments in favor of the Founding Fathers’ vision.

Having said all that, ultimately if voters want a say in something – the Columbia Pike Streetcar in this case – they’re almost certain to get it, one way or the other (e.g., via a referendum or an election – for County Board, in this case). So, the bottom line is that the pro-streetcar forces need to do what I’ve been saying for a couple years now: get their act together, big time, along the lines of the well-organized, well-funded TysonsTunnel.org effort to promote putting the Silver Line below ground in Tysons. Yes, that latter group ultimately lost, but it came very close to winning, against incredibly powerful forces (the Governor, Congressional delegation, all the money Bechtel was throwing around, etc.) arrayed against it. Are streetcar supporters in Arlington willing to make that kind of full-court-press effort? If not, then this isn’t going to end well for those of us who strongly support building a streetcar system in Arlington.

P.S. I’m not at all convinced that a referendum will “save” either Alan Howze or County Board members up for reelection next year. Why? Because I believe the main reason why Republican John Vihstadt won a seat on the Board was mostly about anger at the Board being “insular, arrogant, and non-communicative,” not about any one project – the streetcar, the aquatic center, the “million-dollar bus stops” – per se. Would a referendum on the streetcar cause Arlingtonians who don’t like the Board to suddenly like it? Uhhhh…sorry, but don’t think so.

“Arlington voters are intelligent and I believe it is time for them to be able to weigh in on the streetcar project,” Commissioner of Revenue Ingrid Morroy said. “A referendum forces both sides of this debate to take their case to the voters. This issue has become too divisive to fester any longer.”

“The streetcar project has turned into a political nightmare in Arlington,” Treasurer Frank O’Leary said. “A referendum is the only valid way to get us out of this mess. If there is not a public vote on this project, the public will weigh in through other elections- and that is not a good idea for the Arlington Democratic Party.”

In regards to the upcoming June Congressional primary, Morroy and O’Leary publicly endorsed Patrick Hope and praised his leadership on this issue.

“I’ve made no secret of my support for Patrick Hope from the day he announced. I’ve even called my band The Hopefuls,” Morroy said. “I want to make my endorsement official and I encourage all 8th district voters to elect Patrick to Congress.”

“Patrick has shown superb leadership on Arlington issues as a state Delegate,” O’Leary noted. “We would be extremely lucky to have him serving as our Congressman, and he has my full support.”