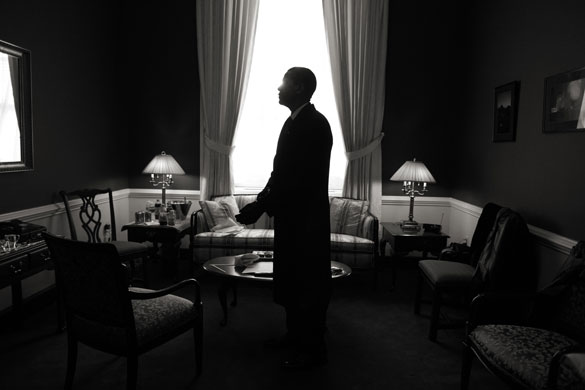 Usually, the President of the United States is the leader of the nation. It is a hugely important position, a single person embodying the whole of one of our three branches of government. With hundreds of congresspeople and a hundred senators, the president is the one person whose voice gets heard.It is only the president who has the “bully pulpit.” Particularly at times of national crisis, the president is the person to whom the nation turns for leadership.

I cannot recall a time — and my close attention to American politics goes back to the middle of the Eisenhower years — when America has been so lacking in leadership as now. When I say “lacking in leadership,” I do not deny that President Obama is working hard to get the nation to move in the directions he’s chosen.

But leadership is not just about the leader’s intentions. It’s also about getting people to follow, about the leader gaining the necessary standing with a followership. And, over the course of his years in the White House, President Obama has proceeded in a way that has undercut the standing that leadership requires.

This loss of standing can be explained in “structural” terms: President Obama has failed to define his leadership in terms of the only available “us” that’s willing to follow him. It’s a matter of boundaries: President Obama has failed to take into account a boundary that formed in the body politic– a boundary that required him to redefine and regroup his followership because, across that boundary, his enemies have been waging relentless war against his leadership.

In a piece comparing Presidents Obama and Lincoln, published here a week and a half ago, I noted that each of those two men was elected president of the United States but almost immediately discovered that they were president only of part of it. The other part had, effectively, declared war upon him.

Lincoln had just recently become president when Fort Sumter was fired upon.

Obama had just recently become president when the other major political party “fired” upon him, planting rumors that he was not constitutionally qualified to be president, trying to make him fail regardless of what he proposed.

Both of these presidents found themselves unable to be president to the whole nation — Lincoln because the Southern region of the country seceded, and Obama because his Republican opposition was determined to delegitimize and demonize him in the eyes of their supporters.

Lincoln demonstrates, however, that the loss of part of the nation in no way disabled him from becoming a leader. Indeed, historians rank him the greatest of American leaders. He became leader by regrouping, by mobilizing the part of the nation that still remained to him against that other part that fought to deny his presidential authority over them.

In structural terms, when the nation is divided along battle lines, what’s required of a leader is that he lead in a way that acknowledges the central fact of the battle. His leadership must focus attention on the boundary separating the part of America that he is leading from the part that, with its enmity and divisiveness, has split the nation into warring parts.

A war was waged on Lincoln, and he became a war-time leader not of the United States as a whole but of one part, the “Union.” Greatest president ever.

Against Obama, a war of a different sort — but in functional terms much the same — has been waged by the Republican opposition. But Obama has shrunk from returning fire in that war, has never acknowledged the centrality of the boundary that his enemies had drawn to split the nation, has never become a “wartime” leader for those millions of Americans who have looked to him for leadership.

The value, for Obama’s standing as a leader, of his acknowledging the battle is demonstrated by those moments when he’s come closest to leading the fight.

He was most successful as a leader when he was running for re-election.  That’s a situation that American political tradition defines in the terms of war– i.e. of “campaigns” and striving for “victory” over an opponent. So, in the campaign season, Obama  played the role. He became — in a fashion, a very tame fashion, considering the viciousness of the assaults upon him — the leader of the “Us” against the “secessionist”/rejectionist “Them.” And people again rallied behind him. He won, and in that process he was again our leader.

He also grew in stature the one other time that he showed himself most ready for battle, i.e. when he made himself quite immovable, and would not back down, in the September-October 2013 battle over closing the government and raising the debt ceiling. Then, too, he grew in stature and made his enemies’ power wilt.

But for the most part, Obama has never shown a willingness to fight his enemies with anything like their intensity or to press the battle on the real grounds over which it is being fought. These grounds I described in that earlier piece in these terms:

constructive vs. destructive, honest vs. dishonest, integrity vs. hypocrisy, responsibility vs. irresponsibility, compassion vs. cruelty, the greater good vs. selfish advantage.

If Obama had led that battle, he’d be the leader of his part of America, just as Lincoln was. And if he’d been successful in leading that battle, Obama might have played a role in our nation’s history as vital as Lincoln’s, perhaps eventually celebrated with a monument on the national mall, honoring the man who stood up to and defeated a destructive, unAmerican, anti-democratic, dishonest, vicious force.

But instead, Obama has continued to soft-pedal that boundary between the “Us” that he could lead and the “Them” he must lead us against. By ignoring the central battle of our times, President Obama became a lesser figure for that part of America that would gladly have followed him into battle.

In this abnormal situation created by today’s Republican Party, as with Lincoln confronting the secession of an entire region, that’s the only kind of leadership for which there’s room.

Lincoln responded to that necessity. Obama has not.

And America drifts more leaderless than I’ve ever seen it.