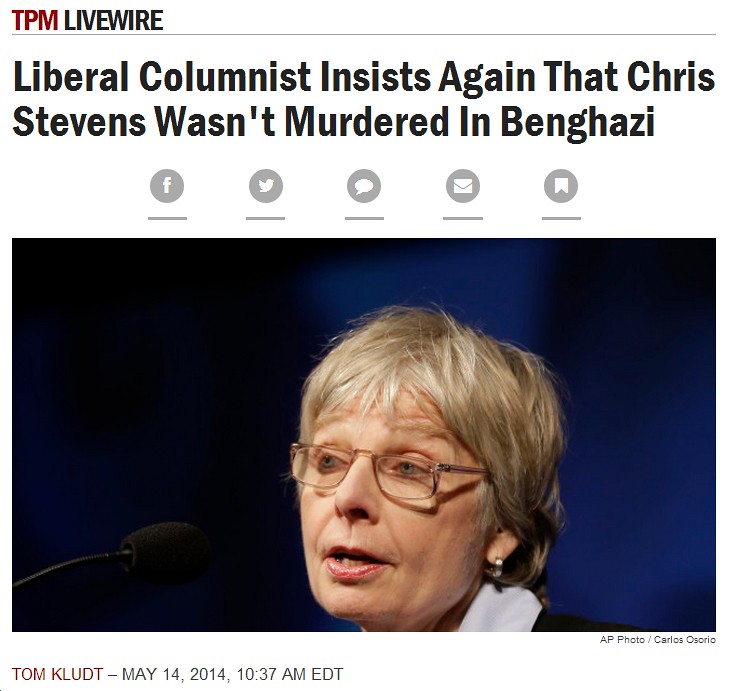 The corporate media loves to draw fales equivalencies between “left” and “right,” Democdrats and Republicans, climate scientists and science deniers, etc, etc. Yet in almost none of those cases is there any equivalency to be found. Another perfect example: crazy conspiracy theories, like the right wingnuts have been pushing about the Benghazi tragedy, and which many MANY prominent Republicans have not only subscribed to, but have pushed hard, “investigated,” fundraised off of, etc.

Now, here comes a comparably outrageous comment by a liberal, yet I can pretty much guarantee that not a SINGLE prominent or in any way significant Democratic elected official will endorse said comment. First, the story: according to Talking Points Memo:

The liberal Daily Beast columnist weighed-in Sunday on the death of Ambassador Chris Stevens in the Sept. 11, 2012 attacks. If there’s a more sure-fire way to troll conservatives on their biggest obsession, we probably haven’t heard it yet.

“This animates the right wing of the Republican Party and I would like to point out that Ambassador Stevens was not murdered,” Clift said on the “McLaughlin Group,” using air quotes around the word “murdered.”

“He died of smoke inhalation in the safe room in that CIA installation.”

OK, so this is bat**** crazy. Let’s be absolutely clear about this: Ambassador Christopher Stevens WAS murdered – by a bunch of terrorist thugs. And yes, as TPM explains, “Stevens did indeed die of asphyxiation from smoke, but Clift’s contention doesn’t seem to square with a common characterization of the other 9/11 attacks…Is it fair to say that those who died of smoke inhalation in the Twin Towers were murdered?”

So here’s the difference between Democrats and Republicans. On the Democratic side, we can immediately and uncategorically state that what Clift said is utterly appalling and beyond the pale. Also, can you imagine any Democratic elected official (or any other serious or prominent Democrat) endorsing her bat****-crazy comment? Personally, I find it disrespectful and disgusting (and nuts), and I strongly condemn it. Meanwhile, on the Republican side of the aisle, leading strategist Karl Rove is running around hinting that Hillary Clinton’s may have brain damage (I’m not joking; he really is doing this!), while other leading right-wing figures have somehow managed to blame Hillary Clinton for the Boko Haram kidnappings, while several possible 2016 Republican candidate for President actually deny climate science! Yet somehow the corporate media manages to come up with an “equivalency” between left and right, Democrats and Republicans? Speaking about bat**** crazy…

P.S. Oh yeah, let’s not forget the embrace by leading Republicans and “conservative” media figures of violent anti-government extremist (and racist) Cliven Bundy. What’s the “equivalent” on the “left” of anything like that?!?