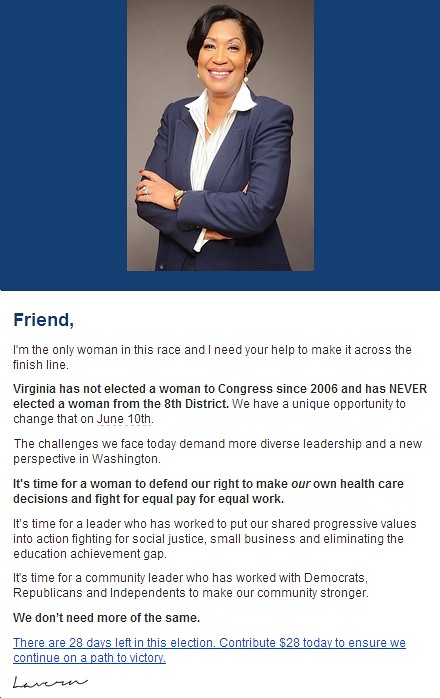 It’s been more than 50 years since Martin Luther King, Jr.’s great “I have a dream” speech. One of the most important, and most famous, lines from that speech was simple yet profound.

“I have a dream that my four little children will one day live in a nation where they will not be judged by the color of their skin, but by the content of their character.”

I’ve always strongly agreed that we should be moving in that direction – towards a nation in which people are judged based purely on their merit – not just in terms of the “color of their skin,” but regarding any form of insidious, corrosive “identity politics.”

Identity politics are political arguments that focus upon the self-interest and perspectives of self-identified social interest groups and ways in which people’s politics may be shaped by aspects of their identity through loosely correlated social organizations. Examples include social organizations based on race, class, religion, gender, ethnicity, ideology, nation, sexual orientation, culture, information preference, history, musical or literary preference, medical conditions, professions or hobbies. Not all members of any given group are necessarily involved in identity politics.

To be clear, I’m not saying those factors aren’t going to be taken into account by human beings in the real world. That’s just reality, both in life generally and in politics, which is what I’m talking about right now. But that doesn’t change the GOAL, which should be for people to select/elect candidates based on  – wait for it, are you sitting down? – who the best candidate is on the merits (e.g., you agree with their political ideology, you think they’d do a great job) rather than because of their race, gender, sexual orientation, ethnicity, whatever.

Now, just so there’s on confusion as to what I’m saying: I DO believe that taking race, ethnicity, gender, etc. into account can be acceptable in a “ceteris parabis” (“all else being equal”) case, to break a “tie” between two equally-qualified candidates, or where there’s an overriding need to remedy an injustice, such as the absence (or near absence) of any members of a particular ethnic, racial, gender, generational, etc. group in university, corporation, Congress or wherever. Thus, I continue to support affirmative action; as long as two candidates are equally qualified, I’d favor a minority person – even for a job – because I think diversity is important But I would never choose the less qualified person simply because they are a woman (or a man), an African American (or white or Latino or Asian), LGBT (or straight), old (or young), married (or not), a parent (or not), etc.

Yet that, frankly, is exactly what one of the candidates in the 8th CD Democratic primary – Lavern Chatman (see a screen capture of her recent campaign email to the right) – is asking voters to do: choose the less qualified person simply because she’s a woman (she sometimes adds African American as well). Heck, last night she actually stated that (all) women are better than (all) men at compromise, working with other people, etc. Sorry, but that’s just offensive — including to Jim Moran, a white man last I checked, who Chatman is running to replace in Congress, and who she’s essentially arguing is genetically incapable of doing his job (note: it’s also insulting to the highly qualified candidates in this race – Ebbin, Hope, Beyer, Euille, Levine, etc. – all of whom just so happen to possess “Y” chromosomes, and are none the worse for it, despite what Chatman’s been implying in her campaign).

You know, all this would be obnoxious enough if Chatman were a seriously qualified candidate for this job, but she’s not for several huge reasons.

The court also found appellant and Littlejohn jointly and severally liable for $1.4 million in punitive damages, ruling that there was “clear and convincing evidence that Mr. Littlejohn and Ms. Chatman acted with evil motive, actual malice and with willful disregard for the rights of the plaintiffs.” The court characterized their behavior as “outrageous and grossly fraudulent,” especially considering the disparity in wealth between appellant and Littlejohn and the “people whom they scammed.” The court also described the transaction as a “deliberate scheme to get around a lawful judgment,” and stated that in its opinion “each defendant needs to be punished for their conduct [and] each defendant needs to serve as an example to prevent others from acting in a similar way.”

The record in this case supports the trial court’s finding, by clear and convincing evidence, that appellant’s conduct was outrageous, grossly fraudulent, and in willful disregard of the employees’ rights. We cannot overlook the massive scale of the fraud, which was designed to defraud not just one, but 297 persons. Another factor making appellant’s actions particularly egregious and oppressive was the enormous disparity of wealth between appellant and the employees.

End of story right there. But if that’s not bad enough, we have #2.

It should be noted that, in addition to speaking positive about McCrory at his Inaugural Ball, Lavern Chatman also donated to his campaign (both individually as well as jointly with her husband). As for the video of her speaking at the inaugural, she links to it from her YouTube channel to this day, which is hard to explain given McCrory’s horrible record since he was elected in November 2012 (I mean, I can understand reading McCrory incorrectly when he was running for Governor, but at this point it’s been obvious since early 2013 just how awful he is). Perhaps Chatman forgot the video was up there? Or perhaps she knew it was up there but didn’t feel the need to take it down? Got me.

…A politically astute Democratic friend of mine suggested I add that while McCrory didn’t talk about his desire to suppress the vote,

he DID run for governor on a platform of corporate tax cuts (and tax cuts for the wealthy), fossil fuel deregulation, and fighting against the federal government’s regulation of healthcare. Ugh. In stark contrast, the Democratic candidate – Walter Dalton – was running on a platform of healthcare for all, environmental protection, and public education. In other words, this choice was an easy one: Dalton was infinitely better than McCrory, and one could see that during their campaign if one read their platforms at all.

So…Chatman was found liable in a “fraudulent conveyance” aimed related to ripping off nursing home employees and strongly supported Teapublican Pat McCrory for Governor of North Carolina. Anything else? Why yes, now that you mention it!

3. In her campaign for the 8th CD Democratic nomination, Chatman has demonstrated a shallow (at best) understanding of many (most?) national issues, let alone international issues, which obviously she hasn’t thought much about in her life. At debates, which I’ve attended a bunch, Chatman has spoken mostly in generalities, frequently coming back to her main arguments: a) she’s a woman; b) she’s African American (note: so is Bill Euille, and Charniele Herring endorsed white male Don Beyer when she dropped out a few days ago); c) she’s a “community leader” (yes, she certainly led those nursing home employees…off the proverbial cliff, that is).

Bottom line: Lavern Chatman’s actions over the years, as well as lack of seriousness for this job, should disqualify her in all 8th CD Democratic voters’ minds. Regardless of her race, gender, or anything else not related to the (highly sketchy) “content of her character.”