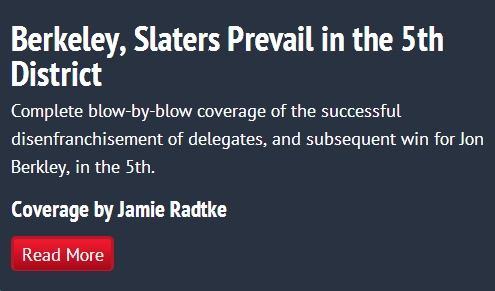 As a Democrat, my attitude is that you’ve gotta love it when different factions of the Republican Party (right-wing, far-right-wing, beyond-far-right-wing) fight themselves. The latest case in point? Check it out.

In this case, it looks like the Republican “establishment,” such as it is (e.g., Congressman Robert Hurt, a right wingnut but perhaps a tad less wingnutty than the Teahadist faction?), held on, as their candidate for 5th CD Republican Chair, Jon Berkley, defeated Teapublican Mark Lloyd earlier today. What was at stake here? If you believe Jamie Radtke (“former U.S. Senate candidate and co-founder of the Virginia Tea Party Patriot Federation”), it comes down to nothing less than “whether our party is going to embrace slating, disenfranchisement, and exclusion OR whether we want to grow our party, embrace our conservative values, and win elections.” If you share Radtke’s point of view, then apparently today’s results in the 5th CD GOP constituted a victory for “slating, disenfranchisement, and exclusion.” Hey, it works for me! 😉

P.S. This latest Virginia Republican dust-up follows last weekend’s stunning defeat of Eric Cantor’s close ally Linwood Cobb by a Teahadist named Fred Gruber, who among other things said this about Cobb: “I’m sure he’d like the glory of continuing to be district chair and driving that big black SUV that’s parked out front with the VA7GOP license plate on it. Looks like a government Nazi car. Eric Cantor drives one. Secret Service drives them. Big black, you’ve seen it, obviously, in some kind of government film.”