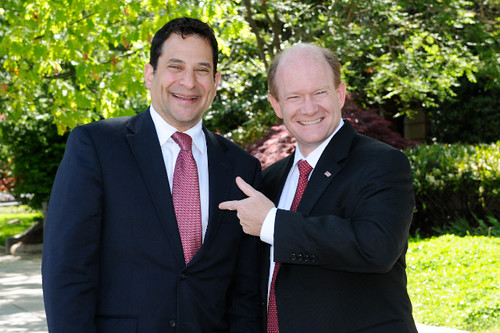 Only US Senator to Announce Support in Race

ALEXANDRIA- United States Senator Chris Coons (D-DE) announced his support today for Mark Levine to serve Virginia’s 8th District as its next Member of Congress. Senator Coons is the only United States Senator to stand by any candidate in the heavily contested Northern Virginia Democratic primary. Senator Coons issued the following statement championing Mark Levine and his campaign:

I have known Mark Levine more than 20 years. Mark has always been passionate about helping those most in need in our communities. Mark’s a smart, strong progressive leader who will fight hard for Virginia’s working families.

Mark Levine made the following remarks regarding Senator Coons:

I am proud to have Senator Coons’ support for my campaign.  Chris has a proven record of being able to get things done, and I look forward to working with him in Congress.  With him in the Senate and me in the House, we can jointly pass legislation that will help working families in Virginia, Delaware, and the rest of the country achieve the American Dream.

For real-time information about Mark Levine’s campaign for Congress: