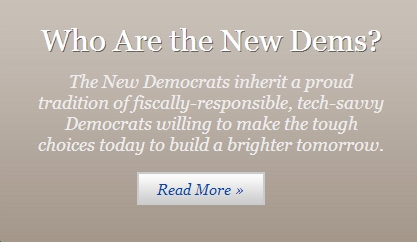 Yesterday, a group called NewDemPAC endorsed Don Beyer for Congress from the 8th district of Virginia. I found that interesting, given that Gerry Connolly and Jim Moran are both leading members of the House’s “New Democrat Coalition” (of which NewDemPAC is its political action committee). I thought it might be helpful to look into the New Democrat Coalition and see what they stand for — and how Don Beyer might fit into this group (or not). Here are some highlights of what I found.

1. According to its “About Us” section, they are the “pro-growth, fiscally-responsible wing of the Democratic Party…a tech-savvy group of legislators who are tapped into the new economy” who favor “ideas over ideology,” and who “believe that the moderate majority of Americans are tired of the constant campaigning and partisan sniping in Washington.”

Don Beyer: This is a classic case of trying to reconcile Beyer’s reputation of being a “pro-business moderate” in the 1990s with his highly progressive stances of his 2014 campaign for Congress. For instance, on taxes, Beyer’s website emphasizes that he “opposed the Bush tax cuts” and “supported the restoration of the 39.6% rate by President Obama.” He also says he “worked for years for a reasonable estate tax limit that would allow family farms and businesses to pass to the next generation, instead of having to be sold to pay taxes” and “strongly support[s] closing corporate tax loopholes.” On the other hand, Beyer was quoted back in 2005 that a national sales tax proposed by Tom DeLay “makes eminent sense as public policy.” I asked Beyer about this, and he talked for several minutes about his firm commitment to progressive taxation, how he would never support a national sales tax or ending the “death tax,” as he was quoted as calling the estate tax back in 2007. So…the mystery continues; which is the more “true” Don Beyer —  the super progressive of this campaign, or the pro-business “moderate” of the 1990s and 2000s? We can’t read his mind, so ultimately we really don’t know, but he IS on record during this campaign in a good way on a whole range of issues, so that’s what we’ll be counting on if Beyer wins the Democratic primary on June 10.

2. A May 2012 article in Politico described the New Democrats’ politics as ranging “roughly from far left to slightly left of center,” and with “six of its 42 members also belong[ing] to the liberal Congressional Progressive Caucus” (that includes Jim Moran). The article adds that “all but three of current New Dems voted for the health care law in 2010,” and that “all but three New Dems backed the [Waxman-Markey cap-and-trade] climate bill.” In both cases, the New Democrat Caucus was far more progressive than the more conservative “Blue Dog Coalition.”

Don Beyer: Beyer pledges on his website to protect and advance health care reform and also has made a national, progressive carbon tax – as well as environmental protection more broadly – a centerpiece of his campaign. If he wins the nomination on June 10, we need to “trust but verify” and hold him to his pledges on those two fronts.

3. On the other hand, the New Democrat Coalition: “enthusiastically supported the free-trade agreements [in the fall of 2011], although a vast majority of House Democrats opposed the deals with Panama, Colombia and South Korea.” The group “also withheld support for their party’s financial reform bill in 2010 until sections were rewritten to make it more palatable to them.”

Don Beyer: There’s nothing on Beyer’s website about trade agreements or financial reform, as far as I can determine. It would be good if he were asked about these subjects at coming debates, or in other forums.

4. On energy/environmental issues, the New Democrat Coalition writes that they “are committed to swift and thoughtful action to ensure that as comprehensive energy and climate change legislation is drafted there is a common-sense approach to addressing our energy needs.” Sounds good, but of course as always “the devil is in the details” (“TDIITD”). For instance, would they support a revenue-neutral or progressive carbon tax (or equivalent cap-and-trade or cap-and-dividend program)? To me, that’s where the rubber hits the road.

Don Beyer: Beyer’s been super strong on this front during the 2014 campaign. Given my strong belief that there’s no contradiction between being pro-business and pro-environment. In fact, there’s strong evidence that putting a price on carbon in a revenue-neutral fashion would greatly HELP the economy.

5. On the Paul Ryan budget, the New Democrat Coalition calls it an example of “‘Budgets to Nowhere’ that make drastic cuts to the priorities they care about most – education, innovation, job training, research and development, and infrastructure for America’s future.” Instead, the New Dems argue that “The best way for us to foster economic growth is to make the core investments in the parts of our budget that enable the United States to remain competitive in the 21st century global economy.” Again, sounds good, but same caveat as above (The Devil Is In the Details – TDIITD).

Don Beyer: On his website, Beyer says he “oppose[s] the proposal in the Ryan Budget that would turn Medicare into a private voucher system.” I have no reason to doubt this, as just about every Democrat in Congress opposes the Ryan Budget. Also, if Beyer wants to stay in Congress for long, he’d be crazy – as would anyone representing Virginia’s 8th CD – to support such a monstrosity.

6. On the idea of a “grand bargain” to deal with the national debt and budget deficits, I agree that “we must address our nation’s debt and get on a path toward long-term deficit reduction,” but yet again TDIITD when it comes to “a bipartisan, comprehensive deficit reduction proposal that combines spending cuts and revenue.” What does that mean exactly? Personally, I wouldn’t support cuts to the middle class and certainly not to the poor. On the other hand, I would support measures like raising the payroll cap so that the vast majority of income (even for the super rich) is subject to the tax; and “means testing” of benefits for high-income people (e.g., millionaires and billionaires). I would NOT support raising the retirement age for Medicare or Social Security eligibility, nor would I support reducing benefits for those who are truly in the middle class or lower on the economic scale.

Don Beyer: This is probably the biggest question for Beyer, whether in the end he’d be a vote for a “grand bargain,” such as the one President Obama and Speaker Boehner nearly reached in July 2011. Of course, this is the classic case of TDIITD. For instance, if a “grand bargain” was weighted heavily towards closing tax loopholes, ending “sequestration” and means testing “entitlements” for the wealthy, it might be fine. If, on the other hand, it contained far more spending cuts than tax increases and/or made life tougher for the middle and working classes, that would be a non-starter. It would be good if there was a direct question – as well as followups, and even letting the candidates question each other –  on the “grand bargain” at future debates, so we could get these candidates on the record. In the end, though, I think we have to look at the candidates’ overall record throughout their careers, as well as what they’ve said during this campaign, to try and judge how they’d vote when they’re in Congress. When it comes to Don Beyer, my gut tells me that he’d be open to some sort of “grand bargain,” I’m just not sure about the specific details would push him from “yes” to “maybe” to “no” (or the other way around).

Anyway, those are just a few major issues of many. The bottom line is that the New Democrat Coalition is not a bad group, it’s just a bit more “moderate” (whatever that word means) than strongly progressive Democrats might prefer in some ways. How Don Beyer might fit into such a group is even more complex, especially considering that two Representatives whose voting records the past few years have generally been excellent – Gerry Connolly and Jim Moran – are leading members of that group. So…no conclusions here, but definitely questions for 8th CD Democratic voters to think about as June 10 approaches.