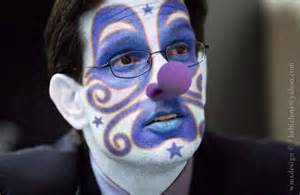 The following press release is from the Democratic Party of Virginia. The image is not. 😉

Richmond — Tonight in Washington, DC, Eric Cantor will join Tea Party darling Darrell Issa at a campaign fundraiser on Capitol Hill. In his role on the House Oversight and Government Reform Committee, Darrell Issa has used his position to become the puppet master of Benghazi political theater, instead of serving the public with integrity and commitment to good government. In fact, just last week Issa fundraised off of the issue of Benghazi in Florida.

Eric Cantor joining Issa tonight raises the question of whether Cantor will join Issa in fundraising off of Benghazi. The House Majority Leader has yet to join many of his colleagues in calling on the National Republican Congressional Committee and GOP House members like Issa not to raise money on this issue.

“Eric Cantor should stop cowering to the whims of Tea Party obstructionists and publicly decry fundraising off of Benghazi. While many Republicans have urged House members to avoid using Benghazi to raise campaign funds, Cantor has been silent. As he joins noted Benghazi spin-master Darrell Issa tonight who has fundraised off of this issue, Cantor’s silence is even more telling. He should once and for all assure Virginians he won’t engage in crass political games involving Benghazi,” said DPVA Spokesperson Ashley Bauman.