Here are the results from the final straw poll of the 8th CD Democratic primary campaign, from Del. Marcus Simon’s (D-Falls Church) event a bit earlier this evening. As you can see, the straw poll was won – not surprisingly, given that Falls Church is “Beyer Country” in many ways – by Don Beyer 24-8 over Patrick Hope, followed by Mark Levine (6 votes), Adam Ebbin (5 votes), Derek Hyra (3 votes), Alfonso Lopez (2 votes; note that he withdrew from the race in early April), Lavern Chatman (1 vote), and Bill Euille (0 votes). 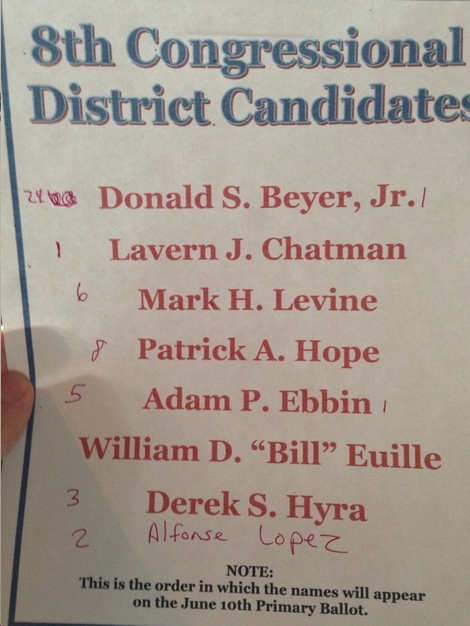 Also, earlier today, Patrick Hope reportedly won the Fairfax County Democratic Committee’s diversity committee “Taste of Diversity” Straw Poll. I’m not sure what the vote count was, or which candidates participated in that one.

P.S. As always, I don’t put much stock in straw poll results, especially ones with so few votes cast. Still, based on real polls and other indicators, I expect the primary next Tuesday certainly sees Don Beyer as the favorite to win, with the most likely runner-ups including Patrick Hope and Adam Ebbin, with the possibility that Mark Levine has also moved up in recent days due to his TV ad campaign.