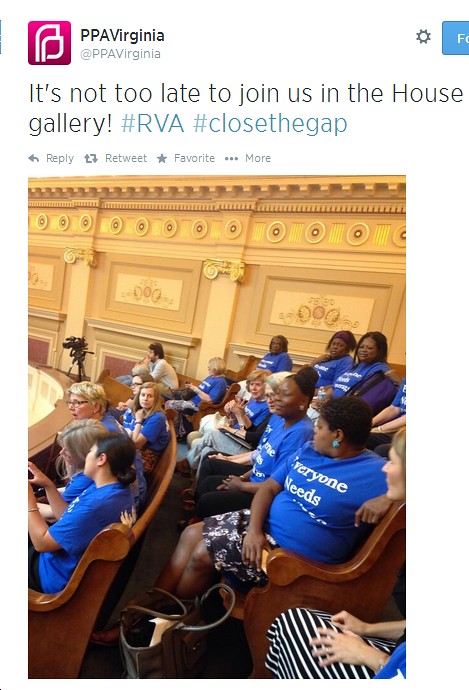 So, if you thought this day couldn’t get any “more stupider,” following the – not joking here – ***skins Pride Caucus announcement, we now have the potential for getting REALLY stupid, as the Teapublican-controlled Virginia House of Delegates kicks into special session to deal with/dispose of Gov. McAuliffe’s vetoes. Should be…er, fun? Well, maybe not. If you can stomach actually watching it, click here. If not, I’ll try to live blog it, although I’m not sure even my stomach’s strong enough for this level of stew-pid.

UPDATE 6:10 pm: Speaker Howell says that Gov. McAuliffe has applied the line-item veto on the MIRC and Stanley amendments in a manner outside of his veto authority. For the reasons he’s laid out, Howell’s determined that item 301ttt paragraph 9 does not constitute an item subject to his veto authority, ergo it’s out of order. In other words, as  ‏@RTDSchapiro tweets, “BREAKING @SpeakerHowell throws out @GovernorVA McAuliffe vetoes clearing Republican obstacles to Medicaid-financed health care fix.” Howell also rules that Gov. McAuliffe’s judicial veto out of order.

UPDATE 5:55 pm: Del. Vivian Watts (D-Fairfax) says she’s not going to get into rhetoric, but where we are on the budget is absolutely within the processes that have been part of our constitution since its beginning. “The governor has the right to veto, period.”

UPDATE 5:47 pm: Excellent speeches by Delegates Surovell, Sickles and Toscano, explaining very clearly why Gov. McAuliffe’s vetoes ARE constitutional, and also urging that House Republicans don’t pull a parliamentary maneuver to avoid putting Gov. McAuliffe’s vetoes to a vote. Del. @Lopez4VA tweets, “Strong comments on the floor today from @MarkSicklesVA, @ssurovell, and @deltoscano.  Making @vademocrats proud!!” @NARALVirginia tweets, “Del. Toscano: ‘We deserve the right to vote [on Gov’s vetoes]…do not use a parliamentary procedure to deny that right'”  Del. Tim Hugo (R) calls what Gov. McAuliffe did a “dangerous precedent,” and that “we need to protect the prerogatives of this body.” Del. Hugo rips Gov. McAuliffe for his harsh language against Republicans on Friday. Hugo says several members of the Republican caucus served in the military, and it was wrong. for Gov. McAuliffe to call them “cowards.” Hugo asks, does Terry McAuliffe want to be the head of a political party or governor of Virginia like Thomas Jefferson.

UPDATE 5:15 pm: LOL, Del. Kirkland Cox (R) is trying to argue that Republicans are the “party of ideas,” not the “party of no.” What. Ever. Cox also claims that House Republicans are “compassionate people” who really care about the people of Virginia. Apparently that was said in all seriousness.

UPDATE 5:13 pm: Great job by Del. Joe Morrissey in calling out House Speaker Bill Howell’s struggles with fact, let’s just put it that way, and his logical inconsistency. So typical that Howell dismissed Morrissey’s argument with a condescending, “I’ll explain it to you later” comment. Pathetic.  Also, @VANewMajority tweets, “Thank you Del @RobKrupicka for recognizing hard work of everyone fighting to #closethegap. It’s time!”

UPDATE 5:06 pm:  ‏@NARALVirginia tweets, “We have a huge crowd in the House gallery ready to urge legislators to #CloseTheGap!” Also, the House is now in session. ‏@MarkKeam tweets, “It’s Medicaid Monday in Richmond. House convened. Expecting heated debate on whether certain vetoes are appropriate.” @ProgressVA  tweets, “The @VaHouse is in session to consider @GovernorVA’s vetoes. We’re in the gallery w/ 30 folks to tell @SpeakerHowell to #ClosetheGap”