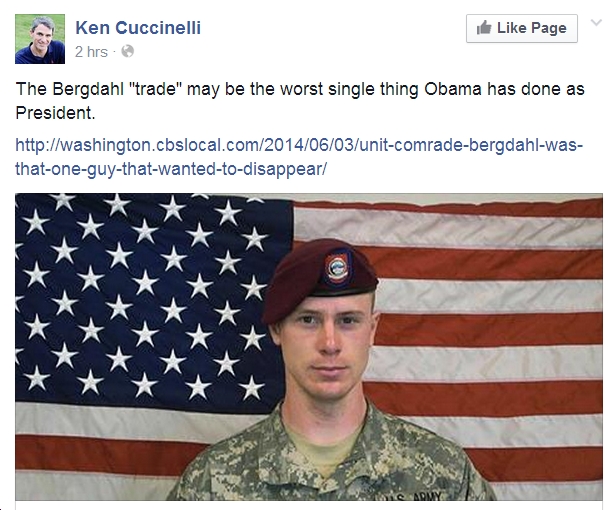 Riiiiiiiiight, so according to our old pal Ken Cuccinelli, getting U.S. Army soldier Bowe Bergdahl out of Taliban captivity (where he was apparently in serious decline, healthwise), by doing what has been done for many years by many presidents (see blockquote below), was the worst thing President Obama’s ever done.

Despite Republican criticism and a planned congressional hearing, President Obama’s decision to trade five Taliban fighters for Army Sgt. Bowe Bergdahl was not a departure from history, U.S. law, or his long-delayed promises to end the wars in Iraq and Afghanistan and close the military prison at Guantanamo Bay.

None of the men involved in the swap are members of al-Qaida. What’s more, the five detainees – who spent more than a decade at Guantanamo – were transferred under heavy restrictions that will prevent them from rejoining the battlefield, unlike hundreds of Guantanamo prisoners who were released by former President George W. Bush.

OK, so obviously Ken Cuccinelli’s cuckoo; we’ve known that for years. But let’s try to follow his “logic,” from his own perspective. According to “the Cooch,” the Bergdahl-for-5-Taliban-prisoners swap was worse than:

*The EVILEVILEVIL “Obamacare,” which Cuccinelli wasted god-knows-how-much time and Virginia taxpayer money fighting when he was Attorney General. By the way, I still can’t believe this extremist nutter was Attorney General of our state, but somehow we survived. 😉

*The new EPA carbon emission rules for existing power plants, which are actually quite modest given what the science says we need to do (and which give states a great deal of flexibility in implementing, which a “states rights” guy like Cooch should LOVE!), but which fossil fuel tools like Cuccinelli falsely believe are the end of the world, kind of like…

*BENGHAZEEEEEEEEEEEEE!!!! ‘Nuff said on that phony “scandal,” other than I don’t remember Cuccinelli and his ilk going nuts about these (“A List of Deadly Terrorist Attacks on U.S. Diplomatic Targets Under President George W. Bush, 2001-2009“). Or this. Or many other disasters and f’ups under Republican Presidents.

*Obama being a pro-gay-marriage, closet “Muslim” who wasn’t even born in the United States, and by the way is a Commie. Oh yeah, he’s also simultaneously weak/ineffectual and overbearing/tyrannical. Uhhhhh….yeah. I mean, do these people have any idea the extent to which they’re pyschologically “projecting” their own warped fantasies?

Info from the Virginia Emergency Support Team (h/t @SenatorHashmi) on the restart of the Colonial Pipeline https://bluevirginia.us/2021/05/thursday-news-biden-is-reaching-out-to-republicans-but-his-real-target-is-joe-manchin-liz-cheneys-downfall-shows-the-gop-threat-to-democracy-is-getting-worse-how-long-can-trump#comment-5381937631