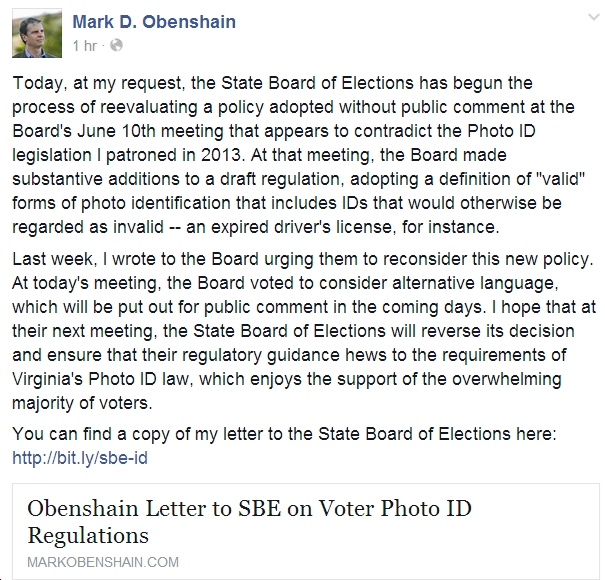 We already knew that Virginia State Senator Mark “Criminalize Miscarriages” Obenshain, last year’s Republican nominee for Attorney General, is willing to trample the law just like his hero Ken Cuccinelli. Previously, it was his efforts to make miscarriages by Virginia women a crime that needed to be reported to the police. Now, Obenshain has apparently taken up a new cause: making it as hard as possible for people to vote. Check this out.

So what does the Virginia State Board of Elections have to say about this?  In this June 12 article in the right-wing Watchdog.org, it reports that “SBE Secretary Don Palmer said the action – which eliminates the current 30-day limit on expired IDs – should not be considered controversial.” Note that Palmer is no flaming liberal; in fact, he was appointed by Governor Bob McDonnell in 2011, served in President George W. Bush’s Justice Department, and worked for Congressman Tom Feeney, who “earned a reputation as a brass-knuckles campaigner and when he was House Speaker advocated having the Legislature designate electors for George W. Bush during the 2000 recount.” Anyway, here’s what Palmer had to say.

*”SBE Secretary Don Palmer said the action – which eliminates the current 30-day limit on expired IDs – should not be considered controversial.”

*”Palmer added that a second layer of identification still requires voters to provide their full name and address to poll workers.”

*”The law separately requires the voter to orally state their name and current residence to the officer of election, who then repeats the information to observers. This separate process confirms the individual is voting at the correct precinct polling place.”

*”The use of the photo ID is the gold standard in confirming the identity of the voter and is not to be used to confirm the address of the individual.”

Yet all that’s not enough for Mark Obenshain in his quest to combat the non-existent-yet-ever-present-in-the-mind-of-right-wingnuts threat of “voter fraud.” Of course, we all know that all the Obenshains of the world want to do is make it harder for minorities, poor people, and others who tend to vote Democratic more than Republican, to exercise their fundamental American right to vote. And this guy seriously wanted to be Attorney General of Virginia? Seriously?!? No wonder why he said that Ken Cuccinelli would serve as his role model. Ee gads.