Yep, the guy who Virginia Republicans nominated for Lieutenant Governor last year, E.W. Jackson, is once again showing his true colors. This time, he’s teaming up with Pastor Charles Flowers from San Antonio for another heapin’ helpin’ o’ crazy (and Obama bashing, of course). So who is Pastor Charles Flowers you ask? I’ll let ABC News take it from here.

The camp is run by Charles Eugene Flowers, a San Antonio-based pastor known for tough-love tactics to rein in troubled teens.

But Siobahn said that Flowers was anything but caring. “Pastor Flowers was mean,” the girl said. “Forceful, mean and strict.”

According to the girl, after she fell behind on a run one morning, Flowers yelled at her and had an assistant hold her down. He then tied one end of a rope to her waist, Siobahn said, and the other to his van.

Every time she fell, Siobahn says, she was dragged along a gravel road. “I was, like, so scared,” she said. The incident left the girl’s knees and legs scraped and bruised.

Bobbi Greer, who worked at the ranch where the incident occurred, said the camp showed less than loving care toward the teen a day earlier. “The torture to this girl went on all afternoon,” she said.

Flowers and the 20-year-old assistant, meanwhile, were arrested and charged with aggravated assault – Flowers will fight the charge.

Unbelievable, right? Yet why is it not surprising that this is E.W., Jackson’s new BFF, a guy who – not joking here – “tied one end of a rope to [a girl’s] waist…and the other to his van,” then “every time she fell…she was dragged along a gravel road.” Crazy, demented s***, not to mention completely against anything Jesus ever taught. But wait, you say, that was back in 2007, maybe the guy’s gotten better since then? Uhhh…not so much. 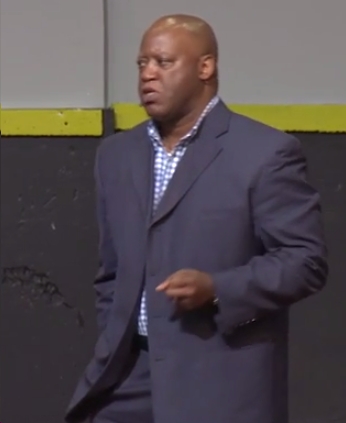 Pastor Charles Flowers says he plans to fight for his right to discriminate.

That is, against “the homosexuals, the transsexuals,” and any other permutation of human sexuality that doesn’t fit the man+woman=child patch he and other supporters wore on their lapels in the City Council chambers Tuesday afternoon.

After two years of pushing from the LGBT rights crowd, City leaders are finally considering expanding anti-discrimination policies to protect gay, lesbian, bi-sexual, and transgender San Antonians. The plan, carried by downtown Council member Diego Bernal, would add “sexual orientation” and “gender identity” (along with the non-contentious “veteran status”) as protected classes to portions of city code that cover the hiring and firing of city employees, public accommodations, fair housing, the awarding of city contracts and the appointment of city board and commission members.

As it stands, LGBT citizens aren’t protected anywhere in the city’s non-discrimination language.

As Mayor Julián Castro said during Council’s Governance Committee hearing Tuesday, the move would put San Antonio in line with nearly every other major U.S. metro, including all other major Texas cities – like Dallas, Fort Worth, Houston, Austin, El Paso. “San Antonio’s not breaking any new ground,” Castro said.

Adding those four words to the city’s non-discrimination laws – “sexual orientation” and “gender identity” -forces the devout to accept something they cannot on religious grounds, Flowers, a pastor at Faith Outreach Center International, told me outside City Hall.

I tried earnestly to get Flowers to elaborate. He kept falling back on some iteration of, “I’m just saying it’s a slippery slope. …How do you say to someone who’s same-gender attracted that their issue is ok, but pedophilia is not ok? Where do you stop?” Easy, I told him. You stop at pedophilia, or any other crime that victimizes children or others.

Anyway, this is the (crazy, extreme, violent, bigoted) person who E.W. Jackson was on a conference call with earlier today, talking about how mean San Antonio Mayor Julian Castro supposedly infringed upon the poor beleaguered anti-gay bigots’ First Amendment rights to be anti-gay bigots. Quick, somebody call a waaaaaaaaaaaambulance for Pastor Flowers and his pal E.W. Jackson! LOL