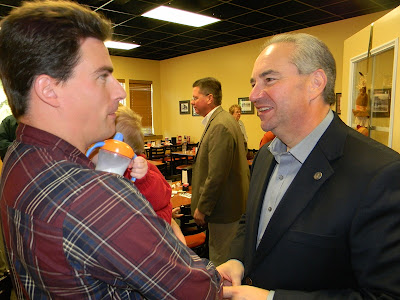 Pattie’s “conversion” from activist Democratic leader in Augusta to independent county board member to full-fledged GOPer ready to challenge an incumbent first elected in 1996 must have heads spinning, to say nothing of the difficulty of explaining his “road to Damascus right-wing redemption” to the Republican voters of Augusta County and beyond. (However, Pattie certainly was massaging Republicans at the Staunton-Waynesboro-Augusta County party to “celebrate” the victory of Mitt Romney over President Obama…snark. The photo above shows Pattie glad-handing former Lt. Gov. Bill Bolling before the GOP tears began flowing as Romney and Allen went down in defeat.) (Note: It has been pointed out to me that the photo that accompanies this post was taken by Lynn Mitchell at the 2012 SWAC breakfast, where Bill Bolling was guest speaker, not at the time of the 2012 election.)