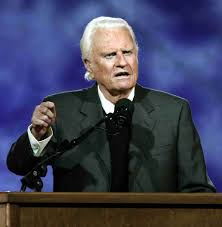 A Reader (a conservative Christian) commented, on a post in which I condemned Liberty University as a “bastion of hypocrisy”– [see Note below for what I wrote about Liberty]:

Just curious; what do you think of Billy Graham ?

I think he did not object to his grandson attending Liberty (?)

Do you think he could help the cause of Christianity by denouncing Liberty U ?

I basically have respect for Billy Graham, and I think he was in some ways a man of God. One could tell that he had some godly virtues that were real.

(He’s a whole lot more whole a spirit than this Franklin Graham (his son?) who seems a very warped spirit, at heart.)

But he was in other ways broken, too.  Billy Graham truly believed in some Christ-like things, but he also had a weakness for power, for being seduced and attracted by power.

His relationship with Richard Nixon is powerful evidence that within Billy Graham there was another spirit — a spirit of brokenness — besides the Christian spirit.

There Nixon was, in all his cramped and twisted ways, being Nixon of a dark spirit, who from beginning to end of his career had a penchant for the ugly and divisive. And here comes this man devoted to Christ cozying up to him, and affirming him. And so also with other presidents.  He made himself into a public figure, the spiritual friend of presidents, without ever seeming to work to influence those presidents to act in more godly ways.

So Graham had his brokenness, as well as his godliness.

I wonder also what it says about him that he raised a son who is such a schmuck as to launch a “crusade” into the world of Islam, to convert them to Christianity, at the very time that the world of Islam and the world of the West were on such delicate ground, ready to explode in perhaps another 9/11 or Iraq war.

It seems to me I’ve done a lot better with my two sons, managing to transmit the values of integrity and of serving the good. Shouldn’t a good man be able to model being a good man well enough that his sons become good men?

And speaking of Liberty University, and its unChrist-like ways. From what people around Lynchburg have told me, the son of Jerry Falwell — the son who is the king in the Liberty kingdom — is far more craven a character than was his father. (There’s another son who is the spiritual leader, and is said to be of much less evil spirit than his brother)

It seems there’s a dark side in the fathers that is available for a son to identify with, if for whatever reason he prefers the dark side. Who knows what evil lurks… i.e., what would be the dynamic between father and son that would lead the son to choose as his model the worst and not the best spirits that dwell within his father?

Here’s what I had written about Liberty University (in an op/ed recently published in both the Roanoke Times and the Lynchburg News & Advance):

When I was a candidate for Congress (2011-12), I traveled all around Virginia’s 6th District, speaking with citizens of all kinds. In the process, I was privy to a variety of strains and disagreements and antagonisms in the District’s body politic. But among all these, one stood out dramatically.

There was one actor – one power – in the District that was regarded by some good and solid citizens in a way like no other, with a kind of deep dread and elemental revulsion I’d never heard expressed in America before. The object of these extraordinary feelings was Liberty University, the Christian institution of higher education in Lynchburg, Virginia.

What does it mean for a Christian institution to be experienced that way by its neighbors. It hardly seems possible that following Jesus’ teachings -“Love they neighbor as thyself”-could give rise to such feelings.

And what does it mean for an institution built to advance Christian values to be aligned with the Party that serves the mighty powers of Mammon, and that regularly preys on the lowly and vulnerable?