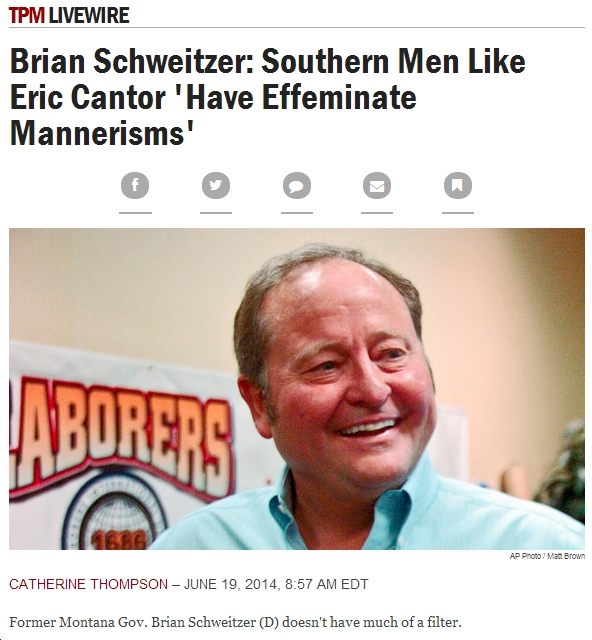 Yes, I realize that Hillary Clinton is likely to run for President in 2016, in which case she’ll win the Democratic nomination easily. But just in case she doesn’t, all kinds of people are likely to throw their hats in the ring. That includes some, er, “unusual” characters, like former Montana Gov. Brian Schweitzer, who as the TPM article notes, “doesn’t have much of a filter.”

In this case, we’ve got Schweitzer musing on Eric Cantor setting off his “gaydar” and how “men in the South, they are a little effeminate” with “effeminate mannerisms.” Add that to Schweitzer’s appearance a few days ago at an “exclusive confab of chief executives and Republican donors hosted by Mitt Romney,” and I think we can safely cross this clown off our lists as a potential 2016 Democratic Presidential candidate. Kind of reminds of me of that crazy Mike Gravel dude who ran in 2008. No thanks.

P.S. What goes off when I see Eric Cantor isn’t any form of “gaydar,” it’s my “idiot-dar” and “emptysuit-dar,” alerting me to the fact that the individual in question is a stuffed shirt who’s certainly not the brightest bulb on the block…

suggests that Sen. Dianne Feinstein was a streetwalker for the U.S. intelligence community.

“She was the woman who was standing under the streetlight with her dress pulled all the way up over her knees,” Schweitzer says of Feinstein, “and now she says, ‘I’m a nun,’ when it comes to this spying I mean, maybe that’s the wrong metaphor-but she was all in!”