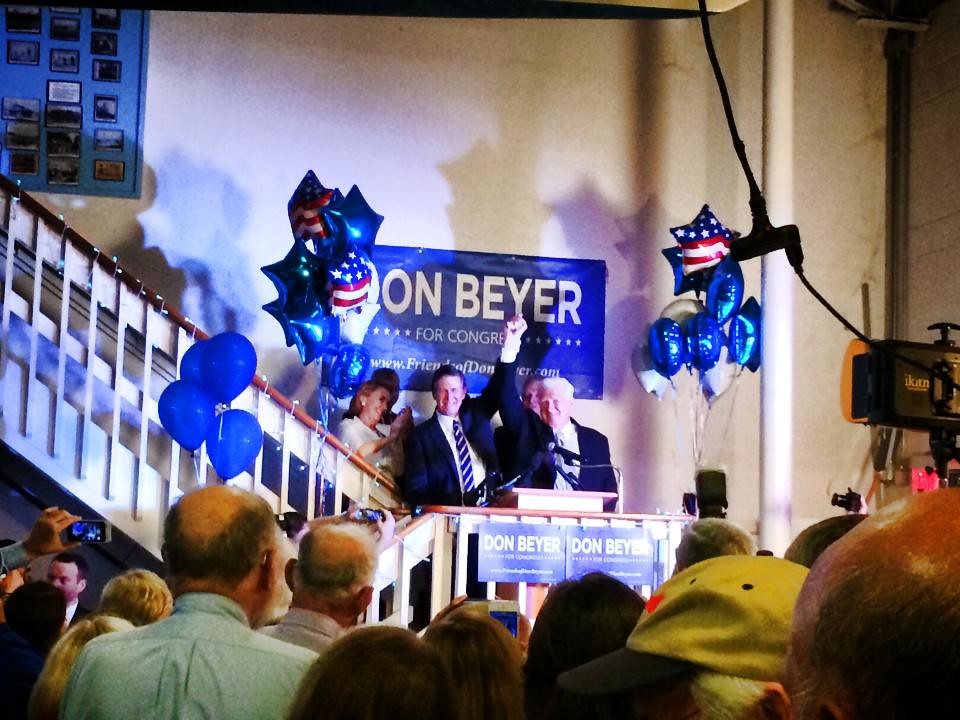 It’s 7 pm, and polls in Virginia are now closed. Which races are you watching? I’m obviously most curious about the 8th CD Democratic primary results, but I’m also a bit curious about the Cantor-Brat Republican primary in the 7th CD, which I’m presuming Cantor will win easily. As usual, result will be available at VPAP and the State Board of Elections website.

UPDATE 8:50 pm: @RTDNolan tweets, “Dave Brat on victory over @GOPLeader Eric Cantor: ‘Unbelievable. It’s a miracle.'” You can say that again! LOL. Also, @ryanobles tweets, “My sense from a number of well placed Republicans is that @EricCantor will not mount a write-in campaign.”

UPDATE 8:36 pm: 7th CD Democratic nominee Jack Trammell’s Facebook page is here. Yesterday, he wrote, “We kicked off our campaign today after receiving a unanimous nomination from the 7th District Committee. I want to thank all of those who supported my nomination and endorsed me as a candidate. We are excited about the next few months on the campaign trail.”

UPDATE 8:34 pm: @ryanobles tweets about Eric Cantor, “This doesn’t sound like a speech of a write in candidate.”

UPDATE 8:27 pm: Looks like Beyer will win about as expected, with around 45% of the vote, vs. upper teens for Hope, mid-teens for Ebbin, single digits for everyone else. The only question I had prior to today was whether Beyer would break 50%, and I guess that’s still possible with more of Fairfax, where Beyer’s strong, to report…

UPDATE 8:17 pm: @Levine4Congress tweets, “Just called @DonBeyerVA to congratulate him on his great victory tonight. Looking forward to working with him as my next Congressman.”

UPDATE 8:13 pm: The 7th CD Democratic nominee is Randolph-Macon College Assistant Professor and Director of Disability Support Services Jack Trammell. “Trammell is the author of The Richmond Slave Trade: The Economic Backbone of The Old Dominion, the 2010 Anthology of Appalachian Writers, Silas House Volume II and Down on the Chickahominy: The Life and Times of a Vanishing Virginia River. In 2009 he won the Virginia Writer’s Club award for non-fiction for his Reflections of a Southern Gentleman Farmer, a collection of vignettes about life with his wife and children on his small farm in Louisa County.”

UPDATE 8:06 pm: Adam Ebbin just tweeted, “Just got off the phone with @DonBeyerVA & congratulated him on his victory. Thank you to all of my supporters for making this a great race.”

UPDATE 7:54 pm: Virginia Tea Party leader Jamie Radtke writes: “goodbye to the Majority Leader. The grassroots have spoken. They wanted to send a strong message to Washington DC and they just did. Oh, by the way…the tea party is alive and well!”

UPDATE 7:52 pm:  ‏@ryanobles tweets, “It is inevitable.. I think we can safely say that @EricCantor will lose the GOP primary to @DaveBratVA7th.” I need to find out more about John “Jack” Trammell,” the Dem candidate, fast!

UPDATE 7:45 pm: Daily Beast reporter @Bencjacobs tweets, “Cantor’s loss tonight may be the biggest upset in US politics since Dewey-Truman.” Seriously, I’m in absolute shock. So much for the death of the Tea Party?!?

Was Youngkin an "outright election denier?" Maybe not, but he definitely dabbled in the "Big Lie," even calling Dominion voting machines "the most important issue we're going to talk about." WTF? https://bluevirginia.us/2022/08/sunday-news-senate-pulls-all-nighter-as-democrats-close-in-on-passing-climate-tax-bill-the-right-wing-plot-to-destroy-public-libraries-trump-wins-cpac-straw-poll-youngkin-gets-0-3-da#comment-5940470837 h/t @Taniel @tripgabriel