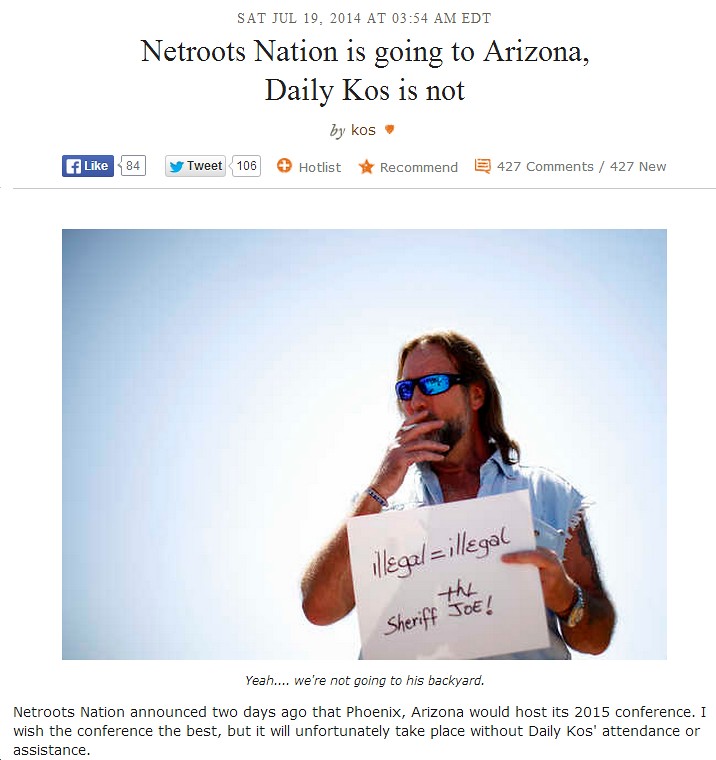 I’ve never attended Netroots Nation, in part because I have no particular desire to spend hundreds of dollars of my own money to do so, but also in part because I never really saw the point. With the bizarre, brain-dead decision of Netroots Nation to hold their 2015 thingamabob (whatever it is exactly) in Phoenix, Arizona (the state being Anti-Latino-Immigrant Central, pretty much), there’s less reason than ever to attend (although perhaps the corporate media, which otherwise could give a crap, will cover it just because there now will be “controversy,” which they LOVE?).

Is there a broader point here? In my view, there is. Namely, that Democrats, liberals, progressives, environmentalists, etc. should try to live their values as much as possible. No, nobody’s perfect, but I see no reason why we shouldn’t try, to the extent possible, to…

*Boycott horrible companies like Hobby Lobby and Chick-Fil-A, and refuse to purchase products that enrich the Koch brothers, or support companies that pay their workers slave wages, etc, etc.

*Support businesses that DO conform to our values.

*Choose to travel to, hold conferences/do business in places that we feel good about, and avoid places that do bad stuff like discriminate against whole groups of citizens.

*Refuse to appear as guests on Faux “News” or other right-wing propaganda channels, which in my view convinces none of their viewers/listeners, but DOES help lend them legitimacy, as they can claim they allow “both sides” to air their views and that they are thereby “fair and balanced.” One of the most egregious examples of this was President Obama agreeing to an interview with hatemongering right wingnut Bill O’LIElly. That was utterly inexcusable on both moral and political grounds (e.g., it was wrong morally AND it didn’t help Obama politically in any way).

Again, we’re all human and none of us are perfect, but we can STRIVE to live our values as much as possible. In the case of Netroots Nation, last I checked there are 50 states in this country, including many that are far superior to Arizona in terms of reflecting the progressive values Netroots Nation stands for. Not that they care about my opinion on this, since they didn’t even care about Kos’ for god’s sake (WTF?!?), but I strongly advise them to rethink this truly stupid decision.