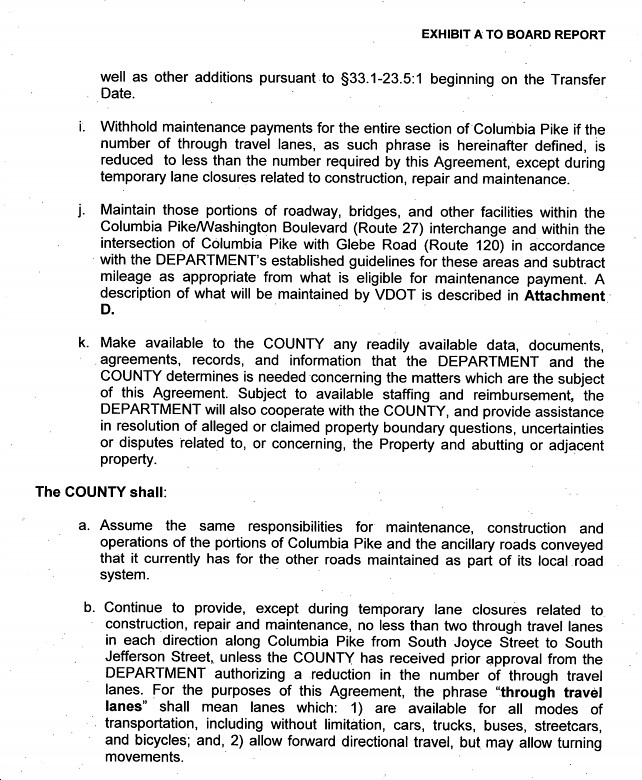 In the debate over the proposed Columbia Pike streetcar system, one of the only things that both sides (pro-streetcar and anti-streetcar) appear to have agreed upon to date is that we can’t have “dedicated lanes” on Columbia Pike. For pro-“Bus Rapid Transit” (BRT) people, that’s a fatal problem of course (even if they won’t admit it for whatever strange reason), since true (let alone high-quality) BRT by definition requires a dedicated/exclusive, BRT-only lane. Ergo: no dedicated lane on Columbia Pike (or wherever)=no possibility of BRT on Columbia Pike (or wherever). Just wanted to get that red herring out of the way at the outset…

Meanwhile, for streetcar proponents, the lack of a dedicated lane is perhaps not optimal, all else being equal – although Matthew Yglesias appears to overstate the case by a wide margin, I do agree that we shouldn’t kowtow to cars at the expense of either streetcar or BRT or any other form of transit. And yes, I’ve always assumed that if we could have dedicated lanes on Columbia Pike, it would be superior to putting the streetcar in mixed-use traffic lanes with buses, cars, etc. A no brainer, right? Well, now that I’ve looked into it, including emails with current and former Arlington County Board members, I’m in fact leaning towards the conclusion that it doesn’t really matter much, one way or the other. I’ll explain my reasoning, and lay out my research, below.

Again, per Matt Yglesias’ article, my main question was why can’t we have a dedicated lane on Columbia Pike anyway? Is there some technical issue here? Legal? What? I asked around, and got some answers, and got some contradictory information. Here’s what I initially was told by an excellent source who has been closely involved with planning for Columbia Pike over many years.

1. “Short answer: Commonwealth of Virginia won’t permit [a dedicated lane on Columbia Pike]. {That was] part of the conditions when Arlington took control of the road.”

2. “Incidentally, modeling done during the transit planning analysis indicated little benefit from addition of lanes for transit, mostly because east-west flow is really pretty good on the Pike.”

Suitably curious, I then proceeded to look up the Memorandum of Agreement between Arlington County and the Virginia Department of Transportation (VDOT), signed and approved in late September 2010. The key language appears to be as follows (also see screen shot above right):

*The County “shall continue to provide, except during temporary lane closures related to construction, repair and maintenance, no less than two through travel lanes in each direction along Columbia Pike from South Joyce Street to South Jefferson Street, unless the County has received prior approval from the Department authorizing a reduction in the number of through travel lanes…‘through travel lanes’ shall mean lanes which: 1) are available for all modes of transportation, including without limitation, cars, trucks, buses, streetcars and bicycles…”

*VDOT shall “[w]ithhold maintenance payments for the entire section of Columbia Pike if the number of through travel lanes…is reduced to less than the number required by this Agreement, except during temporary lane closures related to construction, repair and maintenance.”

Now that part confused me, as Arlington County states that it already “will be responsible for additional maintenance and operating expenses estimated to cost $660,000 annually.” So what would Arlington lose if it reneged on the deal regarding no dedicated lanes?

More importantly, what I didn’t understand was why Arlington County couldn’t simply request “prior approval from [VDOT] authorizing a reduction in the number of through travel lanes,” as per the Memorandum of Agreement. Perhaps that wouldn’t have been a wise option back in 2010, when Arlington-unfriendly and transit-unfriendly Republican Gov. McDonnell was in charge, but what about now that the Virginia Governor’s Mansion is controlled by the Democrats? Has Arlington inquired about this to Gov. McAuliffe’s team? If so, what was the answer? If not, why not?

So, again, I asked around, and I got answers. First, here’s a fairly lengthy response from the same, extremely-well-informed source I mentioned earlier (bolding added by me for emphasis):

…the Board wanted control over the Pike because it was taking years and adding unnecessary expense to do anything to improve the street:  Like the pedestrian crosswalk on the east end, which we were installing and paying for, that took close to 4 years to work through the VDOT bureaucracy for routine approvals.  The County Manager and staff came to the conclusion that making the Pike into a pedestrian-oriented Main Street (one of the principal goals of the Columbia Pike initiative, which as far as I know has near-universal support) would be impossible without local control. Streetcar or no streetcar, we needed local control. And so the Manager recommended (almost a decade ago) that Arlington seek control from the state.  (Note that the state was eager to do so; nonetheless, it took several years to negotiate with the barely-functional state bureaucracy.)

As for maintenance funds, in recent years (decades, at this point), Northern Virginia localities have been spending their own money on state-controlled roads, because cash-strapped VDOT, which has generally worked to more rural standards, would never provide what our more urban, intense operating environments call for.  So, we’ve been spending our own money anyway, even as state funds dwindled. (With the extra cost to projects, to say nothing of the loss to the tax base caused by delays, I have long believed the county would be better off taking charge of all the local roads in Arlington.)  The truth is that for very little cost we gained important control, which ultimately will be a net fiscal benefit to Arlington.

While it was unfortunate that the state insisted on mandating the 4 lanes, the County had no intention to reduce them anyway. (Again, the modeling did not support doing so.)

The bit about the VDOT facility at the east end is just silly; that’s not something that was on the table. It’s the state’s property, and they need it to service Shirley Highway and the other parts of the Interstate in the vicinity (which is in our interest, too).

The reason it’s not going to the Pentagon is that DoD has not been interested in accommodating any additional transit facilities. (You may recall that they made great effort to push the bus access away from the building. We negotiated hard, and got help from then-Sen. John Warner, to ensure we still had a good regional transfer center. And this was before 9/11.)  We can always extend track on to the Pentagon compound, should the attitude of top brass change.  But it’s not a matter of Arlington not wanting to go there.

And, of course, it’s not an “Arlington only” project:  it’s a joint Arlington-Fairfax project.

The bottom line, according to my source, is this: “Of course the County can request that the state rescind its condition for 4 vehicular lanes,” but in short, it’s not worth it, as “modeling showed a) there is relatively little time benefit to be gained from a transit-only lane in that portion of the alignment; and b) reducing to one through-lane would negatively impact the vehicular through-put (even with the addition of left-turn facilities).”

I then asked Arlington County Board Chair Jay Fisette for comment, and here’s what he had to say (again, bolding added by me for emphasis):

I have always said that getting a dedicated lane is the optimal situation for either a bus or streetcar. That said, both buses and streetcars often run in mixed traffic, and are designed to do so.

On Columbia Pike, VDOT requires that Arlington maintain two travel lanes in each direction. This was part of our agreement when we took ownership from the State several years ago. VDOT feels very strongly about this.  Our professional staff agree that drivers do need access to both lanes, thus there is no point in asking VDOT for permission to dedicate a lane to transit.

A 2003 traffic study showed that dedicating a lane on the Pike to transit would significantly lengthen travel times for drivers and would reduce the number of vehicles this route could serve to unacceptable levels. This report helped shape the recommendations of the Street Space Planning Task Force that issued their report recommendations in 2004. Widening the road to add transit only lanes would require expensive, uncertain and lengthy property acquisition, and would hurt small businesses and historic properties.

I hope that helps.

Yes, it does help actually – a great deal (thanks!). By the way, if you want to read the Columbia Pike Street Space Planning Task Force Report from February 2004, click here. The report confirms what I was told by my sources, that “exclusive transit lanes in the western part of Columbia Pike would provide no significant improvement in either transit or auto travel times compared to transit running in mixed traffic.” In addition, “[t]he analysis also concluded that auto travel time would increase dramatically if confined to only one travel lane in each direction.”

Bottom line: Although it’s theoretically possible to convert two mixed-use lanes on Columbia Pike to dedicated lanes for transit, by numerous accounts – including a full-fledged study of this issue, as noted above – it makes absolutely ZERO sense to do so, given the width or the road and other conditions of Columbia Pike. Of course, it should go without saying that this completely kills any idea of “BRT” on Columbia Pike, if that was ever taken seriously by anyone (not sure why it would have been, but a few folks keep bring it up). As for a streetcar, the report found that “the average speed on Columbia Pike ranged between 28 and 35 mph with the 85th percentile speed between 37 to 43 mph.” This compares to the average speed of modern streetcars, which is “25 to 35 mph in mixed traffic on city streets, stopping at designated station platforms.” Which is right in line with the observed traffic speeds on Columbia Pike, and if anything faster than what’s considered desirable from a safety perspective in a heavy pedestrian environment. So…no need for a dedicated streetcar lane if you don’t need to go faster than 25-35 mph, regardless of everything else I found in my research. Case closed: no dedicated lane, no BRT, build the darn streetcar already, and reap the enormous Return on Investment!