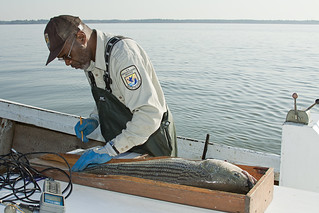 When reporters ignore climate change in their stories, they end up sounding like they’re blaming the supernatural for events easily connected to climate change. I’m late in getting to this, but take this Hampton Roads Virginian-Pilot story from January on a sharp decline in catch of striped bass:

They say there are a handful of elements that have lowered the ocean take the past two years.

Weather has been the biggest reason. Warmer starts to the past two winters have caused many rockfish to stay in the middle of the Chesapeake Bay, or up the coast around upper Maryland and New Jersey. […]

“It’s been the strangest year,” said Rob O’Reilly, chief of fisheries management for the Virginia Marine Resources Commission. “The weather has been so screwy that some fish haven’t moved south like they usually do, and the ones that have positioned themselves offshore.”

Reporters are often reluctant to connect the dots to climate change because they’re not climate science experts and they’re worried that doing so will draw the ire of anti-science Tea Party activists.

But when reporters ignore reality, they leave their audience absolutely baffled. Strange! Screwy! Don’t ask me for answers, you’re on your own! And then newspapers wonder why half of their audience has stopped paying $15 a month for a subscription. If you have to go find the truth yourself anyway, might as well do it for free on the internet.