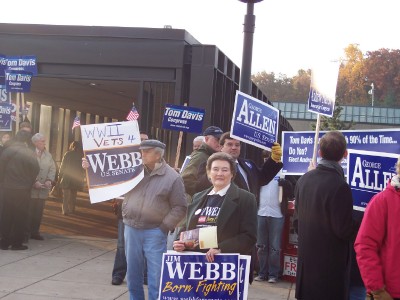 Here are a few national and Virginia news headlines, political and otherwise, for Tuesday, July 29. The photo is of former Raising Kaine/RK and Blue Virginia blogger Teddy Goodson, who passed away over the weekend, doing what she did best: taking the Democratic battle right to Republicans (which, as a Republican for many decades of her life, she was certainly qualified to do). RIP Teddy (although knowing Teddy, she probably took her fight for progressive values to the afterlife – if there is one – with her, and not rest for a minute!).

*Big Oil’s New Pitch: Fracking Means Never Having To Fear Putin (“Oil and gas companies want Washington to believe that fracking can save Ukraine from Russia. It can’t.”)

*Dana Milbank: North Carolina Republicans put ideology above lives (Mayor “O’Neal arrived on Capitol Hill carrying his hiking pole and wearing trail shoes, shorts and a “Save our Hospital” T-shirt. He was accompanied by about 250 supporters, most affiliated with labor unions, and by civil rights leaders.”

*Republicans are absent on immigration reform (“The Republican Party’s paralysis on immigration is so complete – and so utterly irresponsible – that President Obama has no choice but to act on his own.”)

*North Carolina AG: It’s Time To Stop Fighting Gay Marriage In Court (Basically, everyone’s coming to the same exact conclusion that Virginia AG Mark Herring came to months ago. Everyone who attacked Herring on that owes him an apology.)

*Obama Mulls Massive Move on Immigration (“Such a large-scale move on immigration could scramble election-year politics and lead some conservative Republicans to push for impeachment proceedings against President Barack Obama, a prospect White House officials have openly discussed.”)

*4th circuit ruling brings joy to some, upset to others (Yeah, “Sideshow Bob” and “Ewwwwww” Jackson are bummed! LOL)

*Outside McDonnells’ courtroom, a study in contrasts (“Former Gov. Bob McDonnell looked pale and thin but cool and confident, sounding almost chipper as he greeted the crowd. His wife looked small, nervous and unsteady on high heels.”)

*$250 speaks volumes (“Last week, the Virginia Supreme Court ordered the conservative group that unsuccessfully sued Mr. Mann and U.Va. in order to get at his unpublished research and related emails to pay him $250 in damages.”)

*McCollum challenging $3,500 filing fee for Senate primary (“McCollum called the filing fee excessive and said it benefits sitting members of the General Assembly who already have campaign funds at their disposal. His opponents in the Aug. 9 primary are Dels. Rosalyn R. Dance, D-Petersburg, and Delores L. McQuinn, D-Richmond.”)

*Redskins name gets even harder for Daniel Snyder to defend (Of course, the Washington Post keeps using the name, including in the very editorial in which they say it has to go. Logic, anyone?)