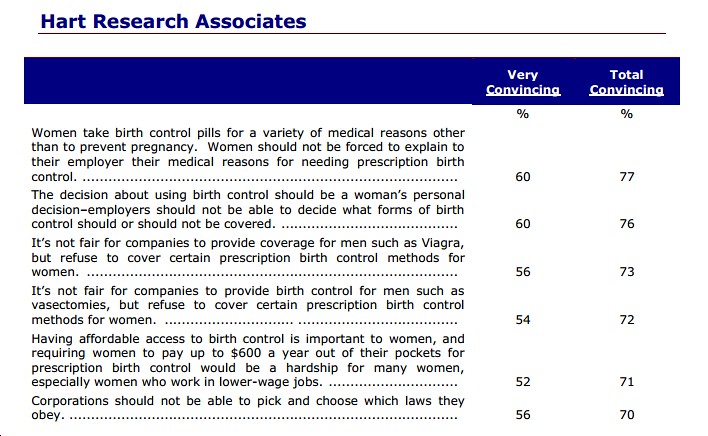 *”More than seven in ten (71%) women voters object to the idea of for-profit corporations being allowed to exempt themselves from a law they feel goes against their religious beliefs; in fact, this sentiment is so overwhelming that it is shared by a majority of every demographic and attitudinal audience, including Democrats (82%), independents (73%), and Republicans (52%).”

*”Not only do a solid majority of women voters in this cohort oppose the Supreme Court’s ruling on Hobby Lobby, but these women voters also say they are paying attention to news about the decision and say the issue is important to them personally.”

*”Women voters identify an array of reasons for opposing the Hobby Lobby decision-including women’s right to make these personal decisions for themselves without interference from their employers, as well as basic fairness concerns that certain forms of women’s birth control would be singled out, while coverage for vasectomies and Viagra are not flagged for debate.”

*”Finally, women voters overwhelmingly describe the current accommodation for religious organizations under the ACA (the basis for the Wheaton College v. Burwell case) as acceptable and reasonable.”

Clearly, Democrats like 10th CD candidate John Foust and U.S. Senator Mark Warner are in agreement with the vast majority of women on this issue. But what about Republicans like 10th CD GOP nominee Barbara Comstock and U.S. Senate candidate “Enron Ed” Gillespie? In the U.S. Senate debate on Saturday, Sen. Warner noted that Gillespie and he have very different views on “personhood,” contraception, “Hobby Lobby,” a women’s right to choose, invasive ultrasound legislation, etc., and that Gillespie hasn’t repudiated any of his party’s anti-women views on those issues. Gillespie’s bizarre response: Warner was supposedly making up Gillespie’s views (oh yeah, so then what ARE your views on these issues?!?), and that Gillespie’s religious views should not be at issue (which of course is exactly the point of separation of church and state, which right wingers like Gillespie don’t appear to understand or respect). Uh huh. In fact, Gillespie was almost certainly just freaking out that he was badly losing the debate, certainly with women voters, and was flailing around for something – anything! – to say. Unfortunately for him, it made no sense whatsoever…

As for Comstock, good luck getting a straight answer out of the person who was called out by one of her Republican opponents this spring as a liar, and who has spent decades falsely smearing people.