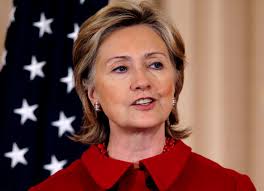 An article in the Wall Street Journal reports on some ways in which Hillary Clinton is distancing herself from President Obama, as she tries to convey to the electorate that a Hillary Clinton presidency wouldn’t be a “de facto third Obama term.”

At one point, the article says: “In another contrast, Mrs. Clinton has said U.S. presidents must never stop courting Congress.”

At that point in the article, I inwardly screamed, “Oh, no!”

Let me put it this way. I can understand the politics of such a statement. It’s probably smart to say. But if that’s what she really thinks, she’s not the president we need.

Not courting the Republicans in Congress could hardly be further from President Obama’s error. They have made war on him from Day One, and his repeated attempts to “court” — and appease — them has brought him to his present pass: a president who can achieve virtually nothing legislatively.

(And now the Republicans are taking him to court to stop his accomplishing things by executive order. Next year, they quite possibly will try impeachment.)

Again and again, Obama reached out to the Republicans in Congress, only to get his hand bitten again and again. This president’s giving up on the idea that the Republicans had any interest in accomplishing anything for the good of the nation was an important step forward.

A Democratic president dealing with this congressional Republican Party has no business “courting” them. But I’d agree with Hillary’s statement (assuming the WSJ reported it rightly) to this extent: there’s something better to do with this Congress — i.e. with the obstructionist Republicans who control (by strangling) the legislative process — than merely ignore it.

“A president should never stop trying to accomplish his goals with Congress,” would be a more fitting statement. And the strategy that would be better than ignoring the obstructionists in Congress would be to fight back at them with the same intensity that they have brought against him from the outset.

These Republicans in Congress are a disgrace of historical proportions. They are an affront to the system of government our Founders gave us. They are a scandal just waiting to be exposed.

I wouldn’t expect Hillary Clinton to talk that way as she sidles toward her presidential run. Thanks to the pathological weakness of the Democrats, as well as the press’s abdication of responsibility, in the face of this unprecedented and unAmerican assault on American political norms and traditions, most of the American people are ill-prepared to respond favorably to a presidential candidate who announces that she’ll deal with the Republican pathology in Congress by pressing the battle.

Most of America is like a bystander who, seeing a bunch of thugs beating some poor guy to a pulp, thinks that his proper response is to complain, “Can’t you guys get along?”

With such an America — one that blames “Washington,” that blames “Congress,” that imagines both parties are being run by extremists — it’s probably good political strategy to pretend that a Democratic president should be making nice with the people who are out to destroy him.

With the president not so popular — for mostly the wrong reasons — it probably makes sense for her to distance herself from him a bit.

But if she really believes that making nice is how to deal with these Republicans, and I am doubtful that she does, I want someone else on the Democratic ticket in 2016.

But if I had to bet, I would bet that Ms. Clinton does not in the least believe that President Obama should be “courting” those Republicans, or that making nice with them, if she becomes president, would get her anywhere.  (After all, she perceived the “vast right-wing conspiracy” back in the 90s, years before it had grown into the huge and monstrous force it has since become.) I certainly hope so.