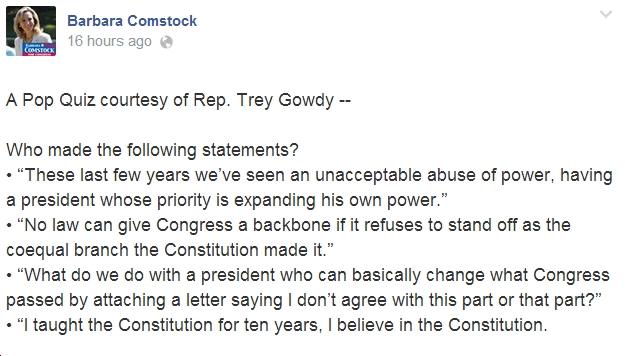 I don’t know about you, but I find it very appropriate – and telling! – that 10th CD Republican nominee Barbara Comstock, who for good reason has been known for years as a hyperpartisan GOP attack dog, would be quoting GOP Benghazeeeee Attack Dog Trey Gowdy. Just to get a taste of Gowdy’s style, which Comstock would undoubtedly emulate if (god forbid) she were to get elected to Congress, here’s how he rolls.

He’s obviously very popular among the base. To call Gowdy prosecutorial would be an understatement. Uniformly angry and outraged, these videos show Gowdy always seemingly on the verge of shouting, he’s so damn mad. Like any good lawyer, he never asks a question to which he doesn’t already know the answer. But when a witness gives him an answer other than the one he expects, he repeats his question at a slightly louder volume and angrier pitch, as though the question hadn’t actually been answered.

I think we can all agree that the LAST thing we need in Congress is more Gowdys, Comstocks, etc.