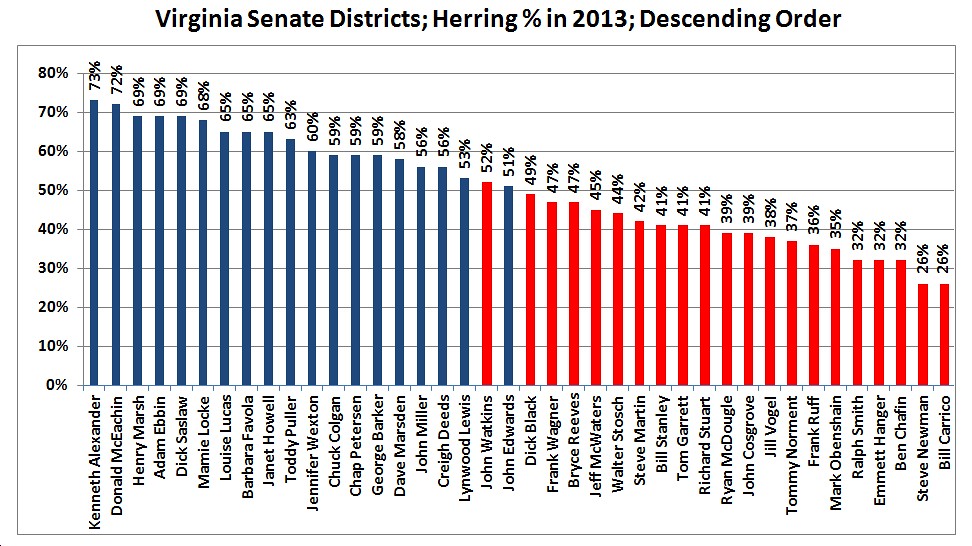 With the loss, as most of us (at least those of us not named “Dick Saslaw”) had fully expected, of former Sen. Phil Puckett’s seat in the special election Tuesday, Democrats are now left in a 21-18 hole (should be 21-19 after former Sen. Henry Marsh’s seat is filled in November). I’ve been trying to figure out what our chances are for picking up a seat or two next year and retaking control of the Senate. I put together the following graph (click to “embiggen”), which lists all 40 seats by descending order of Mark Herring’s percentage in the 2013 Attorney General election. The reason I went with Herring and not McAuliffe or Northam is that McAuliffe was in a three-way race, so that messes up the percentages; and of course Northam’s percentage was artificially inflated (upwards) by the presence of bat****-crazy, theocratic bigot E.W. Jackson on the Republican side in the LG race. Anyway, check out the graph, followed by a few thoughts by yours truly.

First off, notice that most Republican Senators should be safe for 2015, as all of them except for Sen. John Watkins are in districts won by Mark Obenshain in 2013. In Watkins’ case, it’s a theoretically competitive district, but Watkins is an incumbent and will presumably be tough to beat. As for Jackson-level-crazy Dick Black, he’s in a district that Mark Herring almost won, so that’s one we should definitely target. We might want to take shots at Bryce Reeves and Frank Wagner as well, although those will be tough.

Of course, to do any of these things we’re going to need big-time financial resources, which means that Gov. McAuliffe will have to kick into all-out fundraising mode shortly. Is he up for that? Based on what I’ve been hearing, the answer is “not particularly,” but hopefully that will change, especially when the reality hits home that without Democratic control of either the Senate or House of Delegates, it will be extremely difficult for Gov. McAuliffe to accomplish anything major the rest of his term (at least anything major that requires the General Assembly’s cooperation).

Another possibility is that there are strong Tea Party challenges to incumbent Republican Senators like John Watkins, who sponsored the “Marketplace Virginia” Medicaid expansion compromise (the two other Republican Senators who supported “Marketplace Virginia” were Walter Stosch and Emmett Hanger, but those districts are very “red”). If Republicans are stupid enough to nominate a Tea Partier over Watkins, we should most definitely have a chance of picking up Watkins’ district (the 10th).

Of course, Democrats will also have to defend all of OUR vulnerable seats, including potentially the 29th (Chuck Colgan will be retiring) and the 6th (a 53% Herring district, won by Lynwood Lewis in a 1/7/14 special election by just 11 votes), and possibly others depending on retirements, Republican recruitment, etc.

Bottom line: YES, it’s possible we can take back the State Senate next year, but it won’t be easy, especially given that 2015 will mark the lowest voter turnout of the four-year cycle in Virginia, and the one in which Democratic turnout will probably be at its rock bottom both in absolute and relative terms.