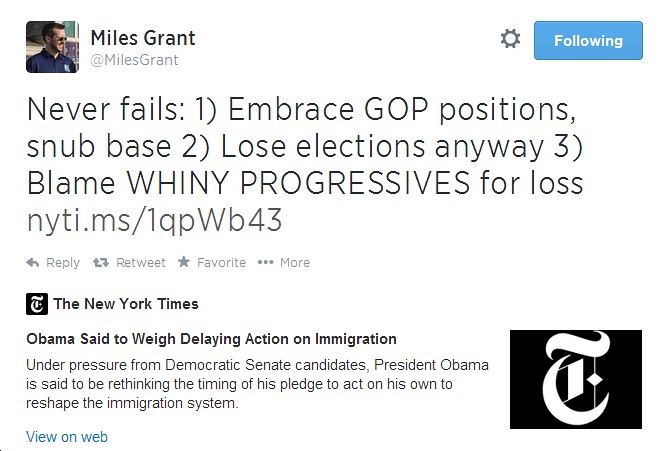 I think Miles pretty much nails it with this tweet. Here are just a few examples, off the top of my head, who have done what Miles describes (and lost anyway) over the past few years in Virginia.

*Creigh Deeds 2005 (ran as a conservative Democrat against Bob McDonnell, only got a few more votes than Leslie Byrne, who ran as a proud, forceful progressive)

*Creigh Deeds 2009 (the whole theory by the so-called “experts” was that a more conservative Democrat from a rural area would have more appeal to independents, “moderates,” blah blah blah. So much for THAT theory!)

*Jody Wagner 2009 (although she certainly did everything Miles talks about – she even agreed to meet with progressives, LGBT activists and environmentalists who were dismayed by her campaign – in fairness she had no chance given the wipeout at the top of the ticket)

*Glenn Nye 2010 (ran to the right, ran away from the Democratic Party, lost by 11 points to Scott Rigell, while Tom Perriello – who ran as a strong Democrat, proud of his values – only lost by 4 points in as tough or tougher a district)

*Rick Boucher 2010 (He gave coal companies everything they asked for. He lost anyway.)

*Ward Armstrong 2011 (As Miles wrote on November 9, 2011, “As for me, what I’ll remember most about the 2011 election cycle is this ad from House Minority Leader Ward Armstrong trashing just about everything Democrats believe in. The leader of House Democrats – as chosen by his fellow House Democrats – distances himself from President Obama, a woman’s right to choose, reasonable gun safety regulations, and limits on air pollution – all in one ad.”)

*Paul Hirschbiel 2012 (classic conservadem campaign, classic results, as he lost by 8 points to Scott Rigell while Tim Kaine AND Barack Obama were winning that district)

(Honorable mention: Wayne Powell 2012 would have lost to Eric Can’tor anyway, but running to the right certainly didn’t help him any.)

*Mike Hymes 2014 (Classic example; this one wasted something approaching a million bucks to get 9,264 votes – around $100 per Hymes voter, many of whom would have turned out with a simple notice that there was an election, so it’s actually a lot worse than that – and lose by 28 percentage points, in addition to running away from Democratic values on issue after issue – woohoo!)

(Honorable mention: Lynwood Lewis 2014 – he came within 11 votes of losing a race he was supposed to win easily, after running to the right, dissing/ignoring the “base,” etc.)