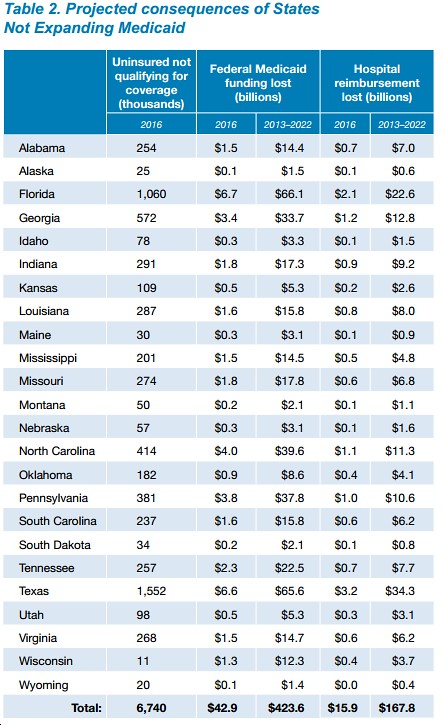 How much of our hard-earned tax money are Republicans throwing away simply because of their Obama(care) Derangement Syndrome? According to a new study by the Urban Institute and Robert Wood Johnson Foundation, a s***-ton (yeah, that’s a technial term – heh).

In the 24 states that have not expanded Medicaid, 6.7 million residents are projected to remain uninsured in 2016 as a result. These states are foregoing $423.6 billion in federal funds from 2013 to 2022, which will lessen economic activity and job growth. Hospitals in these 24 states are also slated to lose a $167.8 billion (31 percent) boost in Medicaid funding that was originally intended to offset major cuts to their Medicare and Medicaid reimbursement.

Insane, right? Nobody in their right mind would even think of doing that, you say? Well, think again — Republicans are doing it all over the country, and for absolutely no good reason, as the Republican “Walking Mayor” (Adam O’Neal of Bellhaven, NC) has been explaining to anyone who will listen.

And how about Virginia specifically? In addition to the 268,000 Virginians uninsured and not qualifying for coverage, we’re talking about $14.7 billion of our own Medicaid money not coming back to Virginia between 2013 and 2022, plus $6.2 billion in hospital reimbursements lost. And again, why are we not getting this money, when Gov. McAuliffe wants it, Senate Democrats (and a small number of Republicans) want it, and House Democrats want it? Well, gee, who does that leave? Hint: they are led by House Speaker Bill “ALEC” Howell, Majority Leader Kirk Cox, Caucus Chairman Tim Hugo and Majority Whip Jackson Miller. Oh, and their party name starts with the letters “R-e-p-u-b” and ends in “l-i-c-a-n-s.” Any more hints needed? 😉