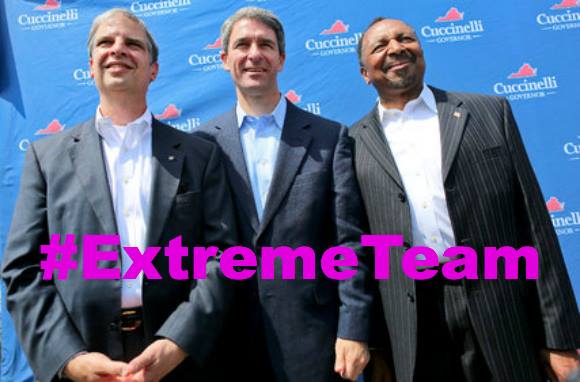 This morning’s Washington Post has a superb, must-read article (if you care in any way/shape/form about Virginia politics) by Post Virginia political reporter Jenna Portnoy. Among other things, it explains very clearly what the bitter, even vicious, divisions are within the Republican Party of Virginia (RPV), and how that party continues its lurch off the right-wing-extremist cliff. Today, as Portnoy writes, the party’s vicious infighting between the Tea Party/Ron Paul/ultra-conservative wing and the more traditional, “establishment” Republicans “could come to a head Saturday when Republicans from both camps – insurgents and establishment – gather in Richmond for a meeting of the party’s governing body, the State Central Committee.”

Popcorn time? Yes, but it’s not just entertainment, it’s also highly significant for the future of the RPV. Specifically: will the party continue purging anyone to the left of Attila the Hun, lurching so far to the right that it loses any and all appeal to independents and even more moderate/sane Republicans?  According to Ron Butler, who “served for five years as Political Director for the Republican Party of Virginia and worked as Field Director for the Republican National Committee,” and also “has been working full-time on behalf of Republican candidates since 1985,” it’s not looking good for the red team.

Ron Butler, president of a ­direct-mail firm with ties to Cantor, was pessimistic that momentum would swing back to the establishment.

“They’re acting more like the Muslim Brotherhood than the Republican Party in this country,” he said of the conservative wing of the GOP. “They scream about Eric Holder and President Obama upholding the Constitution. They’re attempting to throw their own constitution out.”

The question is, assuming Butler is right (and I believe that he is), whether Virginia Republicans continue a process which last year resulted in arguably one of the most extreme political conventions in U.S. history, in which the RPV nominated three bat****-crazy extremists, theocrats, climate science deniers, gun nuts, raging homophobes, conspiracy theorists, and just all-around loons (Ken Cuccinelli, EW Jackson, Mark Obenshain) as their statewide ticket. The result of that extremist ticket was, as we all know, to smooth the way for a far-from-inevitable Democratic sweep of the top three statewide offices (Governor, Lt. Governor, Attorney General) in November 2013. If Republicans had nominated a more traditionally conservative ticket, perhaps one headed by Bill Bolling, it’s quite possible, even likely, that they might have won in 2013. But instead, they threw it away in exchange for right-wing ideological “purity.” Such a shame, huh? 😉

And that’s exactly why, at today’s RPV convention, I’m rooting for the Tea Party, Ron Paul supporters, people like RPV Treasurer/Bigot-in-Chief Bob FitzSimmonds, and other who are “acting more like the Muslim Brotherhood than the Republican Party.” Why? Simple: because the more those folks are in charge, the more it increases the chances for Virginia Democrats to win in 2015, 2017 and well beyond. Sure, it’s sad (and scary) that Virginia (and national) Republicans have gotten so John Birch Society-style extreme, and ultimately we’d all be better off with not just one but TWO sane parties in this state and this country. But on the other hand, if Republicans want to go stark raving mad for years and hand Virginia (and the country?) over to the Democrats for a generation or two to come, that works just fine for me. 🙂

P.S. Tea Party Republican blog The Bull Elephant promises coverage of all the festivities today. Should be fun.