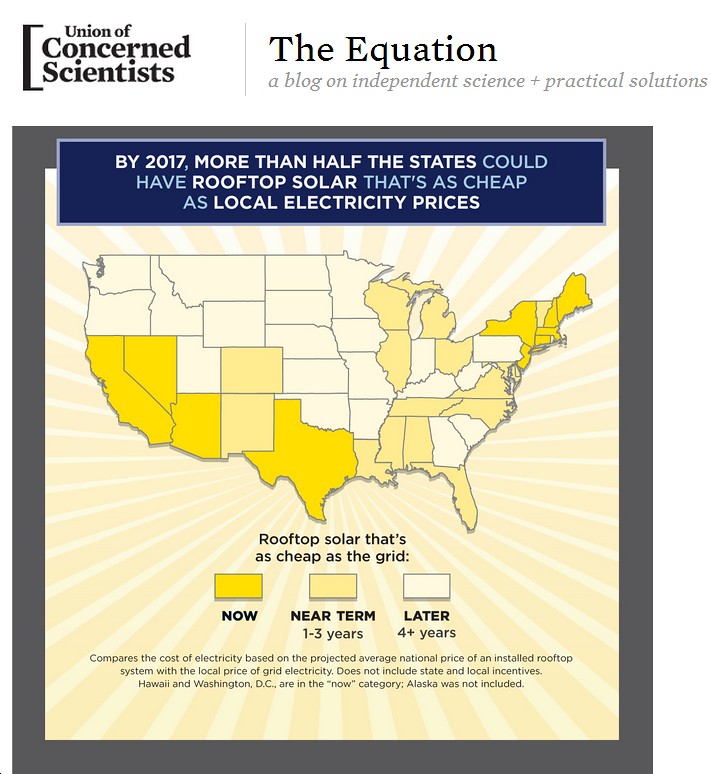 According to a new paper by the Union of Concerned Scientists, along with a blog post on the same topic, it appears that Dominion Virginia Power’s days as an arrogant, polluting monopoly could be coming to a close here in Virginia. Why? Several reasons.

1. Rooftop solar power is soaring, in large part because, between “2010 to 2013, the price of a typical household system dropped by almost 30 percent.” (see graphic on the “flip” and laugh at fossil fuel industry tools/fools like Ken Cuccinelli, Dave Foster, etc., who completely don’t – or won’t – understand this)

3. Rooftop solar power “might be poised to beat utility-supplied electricity…[i]n more than half the states, now or in the very near future.” That includes Virginia, within the next 1-3 years.

4. What’s even more amazing is that this could very well happen in Virginia in spite of the almost complete absence of state policies to encourage rooftop solar (or renewable energy, energy efficiency, etc.). Add in those policies – the Union of Concerned Scientists suggests “net-metering and value-of-solar tariffs…state renewable electricity standards and solar carve-outs, plus tax incentives” – and Dominion Virginia Power’s top-down, screw-the-environment/blow-up-the-mountains, customers-have-no-choice model could collapse practically overnight (unless Dominion Virginia Power actually got off their lazy butts and adapted to the changing market — I know, god forbid, right?).

Now, here are a few added bonuses to Virginians switching to rooftop solar power. First, after grid parity is reached in the next 1-3 years, it is highly likely that the price of solar power will continue to fall, while the price of fossil-fuel-generated electricity will stay the same or rise, which means that Virginians who switch to solar power will save money. Second, of course, solar power emits zero carbon – thus helping fight global warming – or other pollutants (lead, cadmium, sulfur dioxide, mercury, etc, etc.), nor does it require blowing up mountains and severely harming rural communities and ecosystems in the process. Third, if Virginia actually adopts half-decent policies, Virginians could have the option of achieving these benefits by leasing, thus incurring no up-front cost at all (or by saving money on their “green” mortgages).

So what the heck is the Virginia General Assembly waiting for, with regard to passing half-decent (or better) policies encouraging a clean-energy revolution in Virginia? Simple: our fine system of legalized corruption, on display right now in the McDonnells’ trial, which allows entrenched, powerful, wealthy incumbent industries and companies like Dominion to buy off our “democracy,” screw our environment, and laugh all the way to the bank. Of course, given what the Union of Concerned Scientists believes is about to happen here in Virginia with regard to solar power parity, it’s quite possible that it won’t be Dominion Power that has the last laugh on this one. 🙂 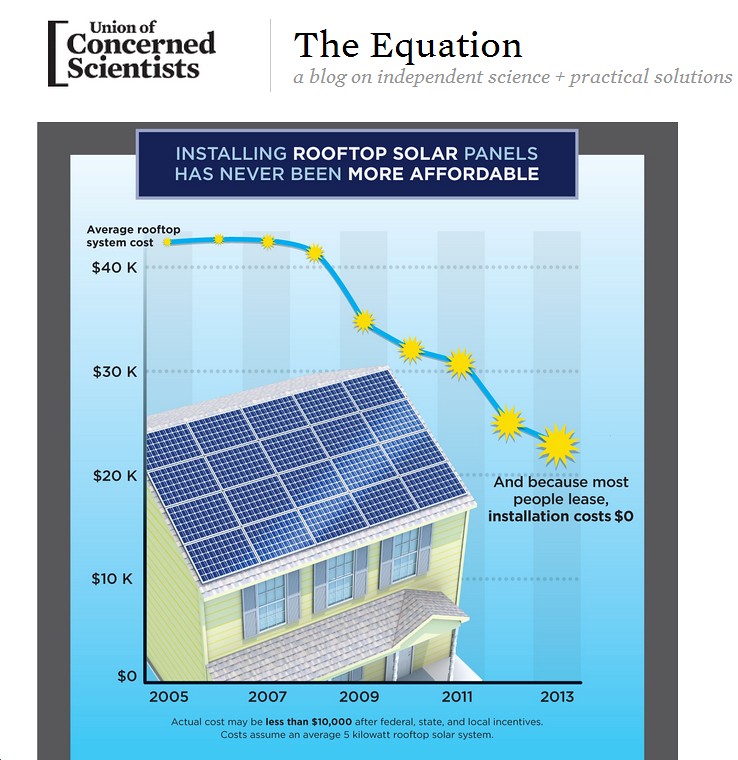