UPDATE 7:15 pm: According to Graham Moomaw, “Still waiting on final counts in #SD16 from @vademocrats, but Dance won by a comfortable margin…Dance/Petersburg victory is big shift in local Senate representation. Marsh, a Richmonder, held seat for 22 years”

Richmond Times-Dispatch reporter Graham Moomaw appears to be the only reporter covering (at least on social media) the 16th Senate District Democratic “firehouse primary” today (the election is to choose a nominee to replace former State Senator Henry Marsh, who resigned/retired). Polls closed at 3 pm, and it’s now nearly four hours later, yet there are no results that have been publicly announced. In fact, according to Graham Moomaw, “The last ballot box is stuck in traffic somewhere on I-95.” Gotta love the fact that we’re in the year 2014 and everything’s gone to super-fast digital, right? LOL 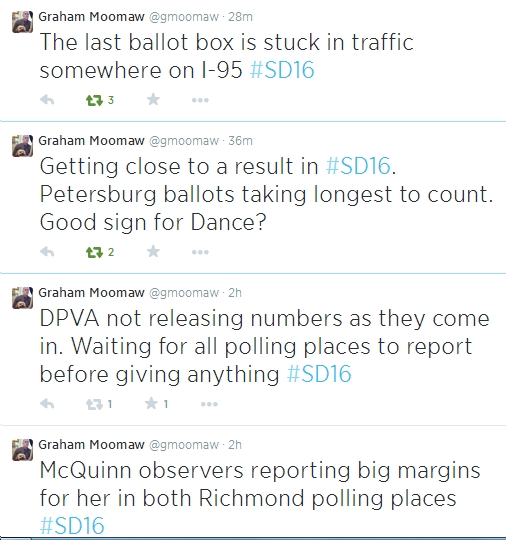