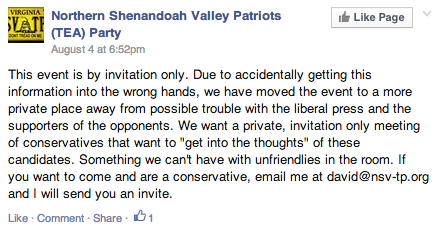 Last week, the Northern Shenandoah Valley Patriots Tea Party invited community members to an event billed as a town hall and forum with Ed Gillespie and Barbara Comstock. Oddly enough, just recently, the Northern Shenandoah Valley Patriots felt compelled to make the speaking engagement “more private” due to the possibility of “liberal press” and “supporters of the opponents” who could be in attendance.
But why is Ed Gillespie so afraid to speak with news reporters in the room? What is really being said behind closed doors in a room full of tea party supporters that can't be said in front of the media?
Looks like another case of Ed Gillespie trying to dodge, duck, dip, dive the Virginia press corps on the multitude of issues he has yet to address in his attempts to forge relationships with the extremist members of the GOP.
See more attempts of his ducking and dodging below:

Gillespie Refused To Answer Reporters’ Questions About His Involvement In The RSLC’s Alleged Scheme To Funnel Gambling Money To Alabama Republicans. “Widely credited with ushering the RLSC into a period of electoral dominance, Gillespie was announced in January 2010 as the group’s national chairman. The title appears to have been an informal designation: Gillespie was not legally listed as the RSLC chairman until February 2011, when the RSLC filed updated documents with the IRS removing Barnes from the job and installing Gillespie in his place. Gillespie did not respond to an email seeking comment, and his campaign referred inquiries about his role in the RSLC probe to the committee. Officials with the group said Gillespie had no contemporaneous knowledge of any questionable Alabama activities. He is not named in the BakerHostetler report.” [Politico, 8/4/14]

The Hill: Gillespie “Dodged” Sen. Warner’s Question About Gillespie’s Views On Climate Change. “During the first, and possibly only debate Saturday between the two Virginia Senate candidates, Warner asked Gillespie about his views on global warming, and whether he sided with a majority of Republicans in Congress who remain skeptical of the science.  “My opponent has never been willing to acknowledge the science around climate change, and that man has an effect on it,” Warner said. “I'd love to take my opponent to Norfolk where seas are rising so much that the Navy is spending tens of millions a year just to raise the barriers.” Gillespie dodged Warner's question at first, instead tying the Virginia senator to President Obama's signature climate rule, which mandates states cut carbon pollution from existing power plants 30 percent by 2030 from 2005 levels.” [The Hill, 07/26/2014]

“Ed Gillespie ducks a question about his work in the Bush administration from Judy Woodruff.” [Tweet James Hohmann, 7/26/14]

“@EdWGillespie ducks on whether he would support Cruz immigration bill: “I haven't seen the bill” #VBADEBATE” [Tweet Laura Vozzella, 7/26/2014]

“.@EdWGillespie refuses to say that he would vote with @tedcruz on his bill #BorderCrisis #VASEN #VASenDebate” [Tweet Michael LaRosa, 7/26/2014]

Gillespie Refused To Answer A Reporter’s Question About What Parts Of The Affordable Care Act He Would Keep, Started Talking About His Energy Plan. At the post-VBA Debate scrum, Ed Gillespie had the following exchange with a reporter: “(GILLESPIE) And, it needs to be replaced with a different approach. A different, fundamental infrastructure of legislation. Now, there may be some things that you can address in that legislation, that are also addressed in Obamacare, but I do not believe that you can tweak Obamacare to make it better, and make it and have it work for you know, the betterment of our country. (REPORTER) But do you support those provisions? (GILLESPIE) I’m looking at those, but certain provisions as part of whether or not they would fit in the context of a broader bill, and I’m going to come forward with broader specific policies as I have on energy. If you want to talk about specifics on energy, I can talk (REPORTER) But we were talking about healthcare. (GILLESPIE) I understand that, but what I’m sharing with you is, that’s what campaigns are about, put forward your ideas. What I’ve put forward is an agenda, a policy agenda. I’ve shared some principles toward that agenda in the same way I’ve put out some specifics on energy policy, I’ll do the same relative to healthcare policy, education reform and tax policy as well throughout the campaign.” [VBA Debate Post-Debate Media Scrum, 7/26/14]

Gillespie Still Hasn’t Decided Where He Stands On “Winding Down” Fannie And Freddie. (Gillespie 47:41) – Well with Fannie Mae and Freddie Mac, I think that one of the problems that led to the meltdown in our economy was that Fannie Mae and Freddie Mac got too far beyond their charter, and they helped to foster the concern and the crisis in the housing market. I do think they need to be curtailed. I’m looking at bills that have been introduced to essentially wind them down, and I haven’t made a decision on whether or not I would support them in regard to that. I think it’s a very legitimate concern.  [Albemarle GOP Meeting, 3/8/14]

Christian Post Pointed Out That Gillespie Website Was Scant On Details. “Scanning at the websites of Republican candidates for the U.S. Senate, for instance, reveals little mention of the issues that social conservatives care about. (See, for instance, the websites of Bill Cassidy, Tom Cotton or Ed Gillespie.) Last month, the Nevada Republican Party made that agenda more explicit by striking all language related to abortion or marriage from its platform.” [Christian Post, 5/6/14]

March 20, Gillespie On What He Would Do To Reform Healthcare: “I’m Looking At A Number Of Different Policy Options Right Now.” In response to a question about how he’d reform health care, Gillespie said “Well, I think when we repeal it, we need to replace it. And we need to make clear to people that…that people understand the negative impact of Obamacare, that they know the effects its having on the cost of care, the quality of care, our choice in insurer or doctors as well. And they’re open to a change, but I think we have to provide some positive alternatives there. There are a number of market-oriented reforms that you can do. There’s a bill that I’m looking at now that Senator Burr and Hatch and Dr. Coburn have introduced that make market reforms that would help hold down costs but allow us to keep the insurance that we have and the doctors that we have; that’s very important to people. I’m looking at different policy options right now, but I think you’re right. We need to not just repeal but replace, so we can make clear to people that we have policies that will work.” [EG Charlottesville, 3/20/14]

Washington Post: Gillespie “Was Short On Details.” “Gillespie was short on details. He said he would flesh them out soon after the convention, assuming he beats his Republican rivals: retired Air Force pilot Shak Hill; businessman Chuck Moss; and Tony DeTora, a policy adviser to U.S. Rep. Dana Rohrabacher (R-Calif.).” [Washington Post, 6/5/14]

The National Journal Wrote That When It Came To Energy & Science, Gillespie Opted Not To Say Anything At All. The National Journal wrote, “And that's when Republicans talk about the science at all: Many, such as Ed Gillespie in Virginia or Cory Gardner in Colorado, opt against saying anything all, instead keeping their focus trained squarely on the effect regulations will have on jobs and electricity bills.” [National Journal, 6/18/14]

John Fredericks Said That He Had Not “Heard A Thing Of Substance From Ed Gillespie.” John Fredericks asked Senator Warner, “Sir, this is a big night for you. I’ve been very critical of your Republican opponent now that he’s the nominee because he’s not said anything, and here it is, we’re going into July, I want a substantive debate, you’re trying to debate the issues, I haven’t heard a thing of substance from Ed Gillespie. When do you think we’re going to engage in some real dialogue here?” [John Fredericks Show, WHKT, 6/21/14]

June 2014: John Fredericks Joked That Gillespie’s Campaign Strategy Was “To Say Nothing At All.” “I don’t know. I’m just – this is just merely conjecture. Merely conjecture. In fact, I’ve perfected an Ed Gillespie impersonation. Ready? Here it is: [silence]. What do you think? [laughs]. Oh, it’s an inside joke – basically silence. Okay, gotta text here from Claire in Chesapeake who says, ‘John, great show.’ Thanks, Claire. ‘I’m on his coalition, and I haven’t received emails either.’ Oh. Claire says, ‘I think this strategy is to hide him away so he doesn’t say anything stupid.’ Well, Claire, that’s not nice. Now, I didn’t say that. I said this strategy, I suppose, is to say nothing at all – that’s why I’ve perfected my Ed Gillespie impersonation. Remember this guy is a messaging genius, that’s where he made his millions of dollars. Messaging.” [John Fredericks Show, 6/25/14]

John Fredericks On Gillespie Campaign:  Haven't Heard Stances Or Alternatives. “I would’ve thought Gillespie right now would be front and center on all of these issues, having a say in it, taking stances on it and offering alternative ideas. Two weeks in, I haven’t heard crap. What’s the deal?” [John Fredericks Show, WHKT, 6/25/14]

WJLA Headline: “Senate candidate, ex-RNC chair Ed Gillespie avoids controversy in NewsChannel 8 interview.” “As a former Republican National Committee chairman and counselor to former President George W. Bush, Ed Gillespie knows political talking points like Beethoven knew music…Asked by DePuyt to more or less put on his RNC hat and address whether some perceived controversial GOP rhetoric from elected officials or candidates in some parts of the country is hurting the party, Gillespie deftly and politely changed the subject.” [WJLA, 6/25/14]