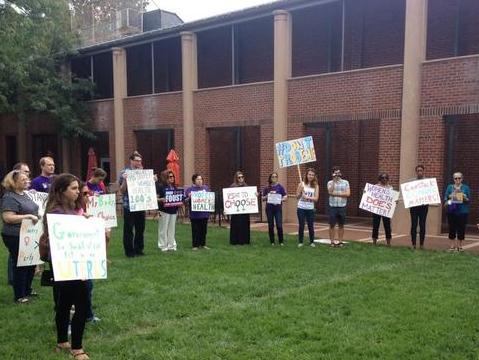 Activists highlighted the GOP congressional candidate’s record of opposition for women’s health and rights in light of her recent remarks
Leesburg, VA – This morning in Leesburg, dozens of Virginia activists led by NARAL Pro-Choice Virginia and the Planned Parenthood Action Fund National PAC rallied in response to recent comments by Republican Virginia 10th Congressional District candidate Barbara Comstock.  The event came a little over a week after Comstock’s bizarre claim at a Fairfax Chamber of Commerce Town Hall that her desire to see Roe v. Wade overturned "would not come into play" were she to become a member of Congress.
In response, speakers from the organizations highlighted Delegate Comstock's record in the Virginia General Assembly, including votes for the controversial 2012 mandatory ultrasound law, medically-unnecessary targeted restrictions that threaten to shut down women's health centers, and an extreme “personhood” bill that could have been used to ban abortion and common forms of birth control.
“Barbara Comstock’s strange claim that her positions wouldn’t matter in Congress is nothing more than an attempt to distract from her unacceptable record and agenda,” said Tarina Keene, executive director of NARAL Pro-Choice Virginia. “Comstock has demonstrated her lack of respect for the reproductive rights and choices of Virginia women and families throughout her career – from voting to ban abortion in all cases, to supporting invasive mandatory ultrasounds, to stating her outright opposition to the rights assured by Roe v. Wade.”
Keene continued: “Last November, Virginia voters sent a message that they want politicians to stay out of their families’ personal reproductive decisions. Pro-choice Governor Terry McAuliffe won Virginia women’s votes with by nine points, in an election that focused largely on these issues. NARAL Pro-Choice Virginia is prepared to ensure that Virginians are once again aware of what’s at stake in this election, and we will work our hardest until Election Day to expose Barbara Comstock’s agenda for what it is: dangerous and out-of-touch with Virginia voters.”
Noah Mamber of the Planned Parenthood of Metropolitan Washington Action Fund, speaking on behalf of PPAF National PAC, added: “Barbara Comstock claims her anti-women’s health views are not relevant in this Congressional race. But even 8th grade civics students know that Congress votes on bills, some of which are about restricting abortion and attacking women’s health. Comstock has voted to interfere in a woman’s personal, private, medical decisions over and over as a delegate: opposing teen pregnancy prevention funding, supporting TRAP laws with medically-unnecessary requirements designed to shut down women’s health centers, and voting for ‘personhood’ legislation that could ban birth control. Why should voters believe she would be any different in Washington?” 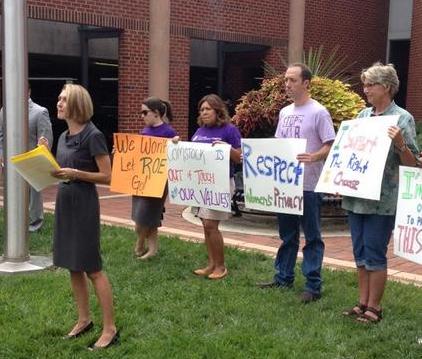 The Bidens: "We voted"; have you? https://bluevirginia.us/2020/10/wednesday-news-as-arctic-methane-starts-to-release-trump-makes-a-final-push-against-climate-science-trumps-closing-pitch-is-based-on-an-avalanche-of-lies-virus-cases-are-spiking-just-w#comment-5128665711

Amusing: far-right Sen. Amanda Chase shared this article, thinking it reflected really well on her chances, but maybe she didn't actually read it? Because it actually says, "her ceiling seems to be 35%...he gives her little chance in a general election." https://bluevirginia.us/2020/10/wednesday-news-as-arctic-methane-starts-to-release-trump-makes-a-final-push-against-climate-science-trumps-closing-pitch-is-based-on-an-avalanche-of-lies-virus-cases-are-spiking-just-w#comment-5128629748