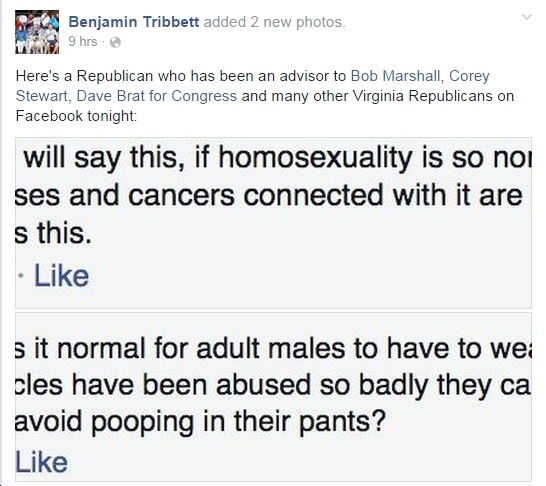 Ben “NLS” Tribbett breaks the news on his Facebook page about a rabidly anti-gay bigot who’s a leading Virginia GOP operative (e.g., he lists himself as a “Senior Advisor” to Dave Brat in 2014) named Steve Waters. Shocker that he’s a Republican political operative (Keith Fimian, E.W. Jackson, George Allen, and the others Ben lists) huh? By the way, one of this guy’s Facebook posts rants about a “rainbow flag flying over the U.S. Embassy in Israel.” Here’s what Waters thinks of that:

Now, he’s back on his favorite theme, the supposed evils of homosexuality, with his latest: “Is it normal for adult males to have to wear diapers because their rectal muscles have been abused so badly they can no longer control or tighten them to avoid pooping in their pants?” Also: “I will say this, if homosexuality is so normal, how come the diseases, illnesses and cancers connected with it are so abnormal. Even the CDC recognizes this.”

UPDATE: This is great, the guy actually goes on Ben’s Facebook page to try and defend himself. He claims: “I’ve got history, natural law and biology on my side on this one. What do you guys have, emotion. You should know emotion doesn’t work well in public policy.” Also hilarious: “I love seeing mean-spirited liberals lose their cool in a debate and all they can do is show people the huge gaps in their tolerance, or lack there of.” He then adds: “I don’t have a problem with homosexuals, I have an issue with them wanting to pervert marriage and tell pastors what they can preach. The good thing is y’all have over stepped on this one with the bi-sexual/transgender side. The American people aren’t ready for that, nor kissing cousins wanting to marry.” Also: “Logic, good one. A man putting part of his anatomy where ‘poop’ comes out of. Yep, that’s love alright.” And this: “Anything I say is going to be regarded as “hate” by you guys so I won’t even try. I’ll say this, you guys use the hate word so often it loses its effectiveness. Like I said, you want to get screwed up the rear as a man, that’s your business, but don’t try and force society to have to accept it. There’s no precedent for your claim. Natural law buddies, have a good one. I’m so glad we had this opportunity to discuss this. If you are on this thread and happen to be a lesbian or gay guy, I wish you well and please take care of yourself and don’t dismiss this stuff without consulting your physician. This is pretty serious stuff. I love you all! Goodnight and God Bless!”

Racial Diversity Maps of Virginia, “in TEN gradations, in over 5 thousand precincts” 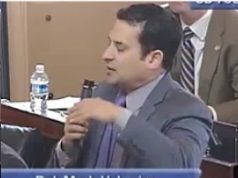 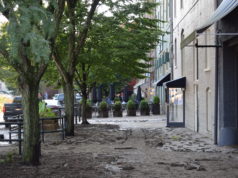