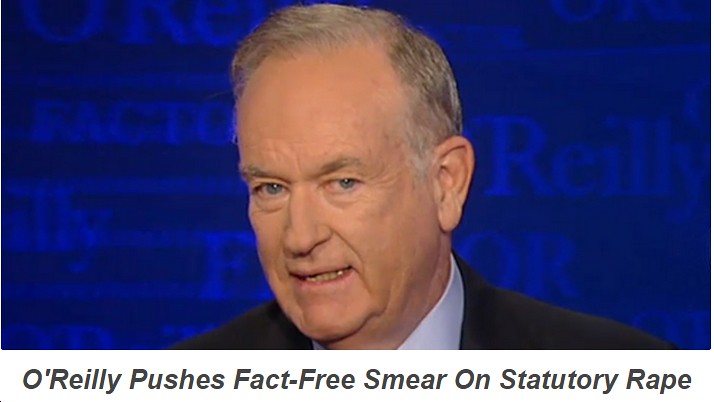 Nothing that the far-right wing says can possibly surprise us at this point. So, mostly, I try to focus on the craziest stuff, and also material that’s the most relevant to Virginia politics. The case of O’Reilly Pushes Fact-Free Smear That VA Attorney General Doesn’t Care About Statutory Rape appears to fit both categories: bat**** crazy and relevant to Virginia politics. First, here’s what O’Reilly had to say:

The attorney general is Mark Herring – very liberal man – who is now saying to the people of the Commonwealth of Virginia, ‘I will not enforce the statutory rape laws for girls 13 to 15,’ is that correct?…Right, so just to be clear here, just to be very clear: statutory rape is of a minor, and then when an abortion clinic or a doctor or a nurse or whatever finds that that has happened they have to report it by law to state authorities. [CROSSTALK] But Herring says no, we in the Commonwealth of Virginia don’t care if little girls are raped. We don’t care because, I the Attorney General, am too damn lazy, or an ideological zealot, or both, to enforce this law. Do I have it wrong?

Uhhhhh….do you have it wrong, Bill? Seriously, do you even need to ASK that question?!? I  mean, does Bill O’Reilly ever get ANYTHING right? Isn’t this one of the main reasons he’s the target of Jon Stewart, Stephen Colbert and other late-night comics several times a week? Anyway, yeah, O’Reilly’s beyond “wrong” in this case, heading far into the realm of “they’re coming to take me away to the funny farm” territory. A few retorts to this offensive craziness.

1. First, here’s a link to the actual opinion, which states: “a VDH licensing inspector who is a nurse and who, during the course of a hospital inspection, learns from the review of a medical record that a fourteen-year-old girl received services related to her pregnancy is not required to make a report of child abuse and neglect pursuant to Virginia Code § 63.2-1509 unless there is reason to suspect that a parent or other person responsible for the child’s care committed, or allowed to be committed, the unlawful sexual act upon the child.”

2. As Media Matters explains, “Herring simply told health officials that teen pregnancy alone is not evidence of child abuse.” That’s right, it’s possible for a teenager to get pregnant without child abuse, such as…let’s think about this one for a minute…by another teenager perhaps?

3. Even the right-leaning Richmond Times Dispatch understands this, writing that the “outrage and fury” by the Family Foundation and other right wingers is “misplaced”:

In a September letter to state Health Commissioner Marissa Levine, Herring cites chapter and verse from the Code of Virginia. The code stipulates that nurses and certain other professionals must report suspected cases of child abuse and neglect. That can include sexual contact with minors, but only if a parent or guardian “commits or allows to be committed” such exploitation.

A 14-year-old can get pregnant without her parents’ knowledge. Since allowing something requires knowing about it in advance, the mere fact of a pregnancy does not imply that a parent committed the sex act, or even permitted it. By itself, it does not provide enough evidence to trigger the reporting requirement for suspected child abuse as defined in state law. (It does, however, provide ample grounds to suspect statutory rape – and nothing in state law forbids reporting that.)

…If lawmakers or others think nurses who inspect hospitals, abortion clinics and so forth should be required to report any pregnancy of a 14-year-old to law enforcement authorities, then they should amend the Code of Virginia to impose that requirement. They shouldn’t expect the attorney general to rewrite the law by fiat. Indeed, Republicans have been complaining (with some justification) that since taking office Herring has behaved like an activist. Now they are complaining that he is not being activist enough. That might be politics as usual – but it’s awfully poor policy.

Just to emphasize from the RTD: 1) “Herring cites chapter and verse from the Code of Virginia”; and 2) right wingers can’t logically (although logic doesn’t seem to stop them) complain that Herring supposedly behaves like an activist in one case (where they don’t like the answer he provides), then complain that “he is not being activist enough” (again, where they don’t like the answer).

4. AG Herring’s opinion doesn’t even mention doctors or nurses who provide healthcare services to a pregnant minor, so this idea that the opinion absolves anyone from reporting child abuse is just a ridiculous and willful misrepresentation. It also has absolutely nothing to do with how law enforcement deals with statutory rape cases when they are reported.

5. And keep in mind that official opinions represent an Attorney General’s analysis and interpretation of current law based on thorough research of existing statutes, the Virginia and United States constitutions, and relevant court decisions. They are not “rulings” and do not create new law, nor do they change existing law or opine on whether a law is “good” or “bad.”

In sum, the right wingers aren’t even close to being on to something here. But it does show how desperately they want to stir up outrage and anger in our country, for no good reason other than their own ratings.