(UPDATE 10 am Thursday: The story is now up on Politico, so everyone can read it. – promoted by lowkell) 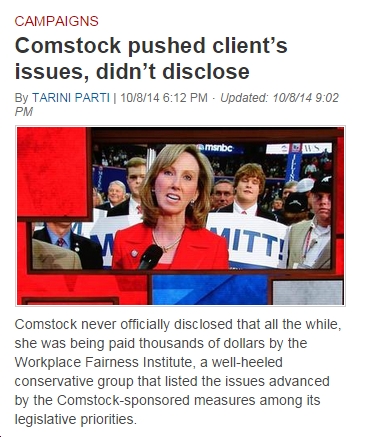 The full story is on Politico Pro, which requires a subscription, but that heading and brief explanation kind of say it all.  For a few more details, see an excerpt from the article below.

It was a remarkable run of success: From 2011 to 2013, Republican Virginia state legislator Barbara Comstock shepherded a trio of bills that were opposed by labor interests through the legislature and into law.

One called for union votes by secret ballot, another kept employers from giving employees’ information to unions and a third prohibited awarding contracts for state-funded construction projects exclusively to unionized firms. Each was approved in a largely party-line vote.

But Comstock never officially disclosed that all the while, she was being paid thousands of dollars by the Workplace Fairness Institute, a well-heeled conservative group that listed the issues advanced by the Comstock-sponsored measures among its legislative priorities.

Comstock, now running for a competitive House seat in the Washington suburbs, also initially failed to list WFI as a client when she filed papers to run for the seat. Her campaign later disclosed the relationship to The Washington Post, calling the omission unintentional. Congressional candidates with an ownership interest in companies are required to report clients who paid $5,000 or more in fees.

Video: Senators Mark Warner, Tim Kaine Discuss Threats to the ACA, the Supreme Court, and What Can Be Done…Starting with ELECTING DEMOCRATS on 11/3