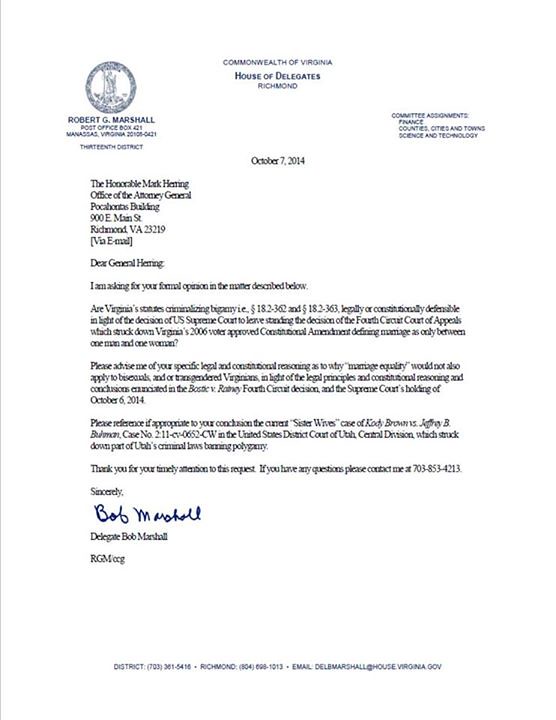 Today I requested an official opinion from Attorney General Mark Herring on the Constitutitionality of Virginia’s Bigamy laws in light of the decision of the U.S. Supreme Court not to hear Virginia’s Marriage Amendment case.

The Fourth Circuit Court of Appeals said in their decison that, “Accordingly, we decline the Proponents’ invitation to characterize the right at issue in this case as the right to same-sex marriage rather than simply the right to marry.”

If the Virginia Marriage Amendment defining marriage as between one man and one woman has been overturned on the basis of the “right to marry” that that right surely extends to “throuples”, those who identify as polyamourous, polygamists and any individual who whishes to marry who or what he/she “loves.”

If it is the “right” of all people to marry who they love then I would like to know if it is the Attorney General’s legal opinion that Virginia’s bigamy and perhaps other laws realted to marriage are also Unconstitutional.

Attorney General Herring said in a speech yesterday, October 6, 2014, at the Arlington Court House that, “Today we celebrate a moment when we move closer to fulfilling the promise of equality…” I would like to know what further steps he believes are legally necessary to fulfill this promise.

The question is, who votes for this bigoted lunatic?