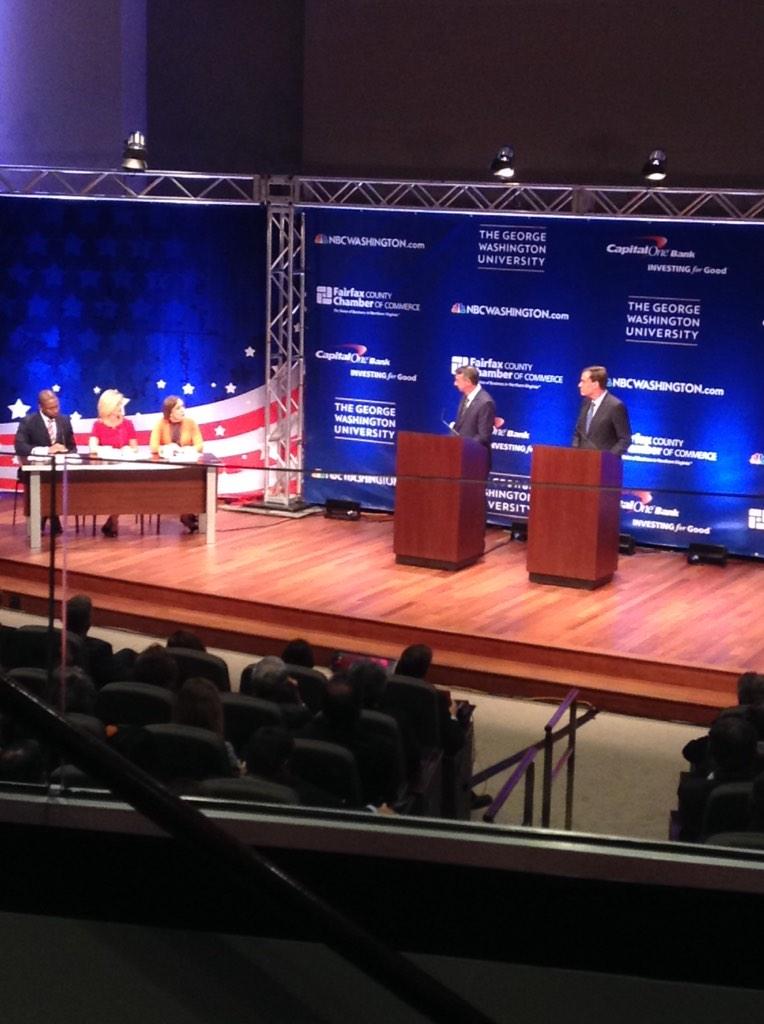 “Join NBC4 and the Fairfax County Chamber of Commerce Tuesday at 7 p.m. for a debate between the candidates for U.S. Senate from Virginia.” The moderator is Chuck Todd; we’ll see if he tries to put words into the candidates’ mouths, like he tried with Jim Webb Sunday on Meet the Press.

UPDATE 7:55 pm: Closing statements. Gillespie says people who supported Warner the last time are supporting him t his time (really? who?). Warner says we’ve heard a lot of negative attacks from Ed tonight. Warner says he’s actually a real optimist about America, he’s lived the American dream, he’s a problem solver who rolls up his sleeves and gets things done.

UPDATE 7:54 pm: Gillespie says job of US Senator is to pass policies to keep American dream alive (ignoring the damage his party’s done to the American dream in so many ways). Warner says the job is to solve problems, and that’s what he’s always done. Never give in to cynicism. Warner says it’s all about what he can do to help move America forward, Gillespie sees everything from a partisan angle.

UPDATE 7:52 pm: Warner says President Obama’s greatest shortcoming is on not pushing more to get our balance sheet in order (actually, Obama did, but Eric Can’tor and John Boehner backed out). Gillespie says he’d work with President Obama on defeating ISIS.

UPDATE 7:45 pm: Question about unemployment in places like Southside Virginia compared to relative wealth in Northern Virginia. Warner says he’s proud about Virginia’s low unemployment rate, and that everything about his career has been about creating jobs. Says he supports “all-of-the-above” energy policy and tax reform to help bring jobs back to places like Southside and Southwest Virginia. Gillespie says Gov. Warner wouldn’t recognize Sen. Warner today, does his big lie about “job-killing policies” (actually what HIS party did, while the unemployment rate has plunged under Democratic leadership the past 5 years). Now Gillespie’s doing the Big Lie on the EPA’s proposed Clean Power Plan. Wait, look, Ed Gillespie’s nose is growing longer! 😉  Warner says he supports extending the comment period for Clean Power Plan, supports “all of the above” but recognizes the challenge of climate change, which Gillespie refuses to acknowledge. Reminds people that Gillespie was a lobbyist for Enron, and his economic policies drove the country into a fiscal ditch. Gillespie says there’s evidence of climate change and that man is contributing, but that we should close down coal-fired power plants. God, the idiocy here…it truly burns.

UPDATE 7:39 pm: Question about immigration, in-state tuition. Gillespie dodges, says it’s a state policy, says he does not believe we should confer citizenship on people who have broken our laws, should start by “securing our border” (he claims it’s a national security threat and public health threat with ISIL and Ebola — ok, now he’s heading in tinfoil hat territory). Warner correctly points out that the Senate passed a bipartisan (68 Senators), comprehensive immigration reform bill, but the House won’t take any action. Warner points out that Gillespie supported the bill before he was a candidate, now he’s against it? Gillespie claims his position has been entirely consistent, which is of course laughable.

UPDATE 7:38 pm: Question about Harry Reid and Mitch McConnell. Warner says we can do better in both parties. Gillespie says he likes Mitch McConnell (gack!!!)

UPDATE 7:33 pm: Question about bipartisanship (or lack thereof) in Washington. Warner says he’s not willing to accept the notion that in America we can’t fix problems. Says he’s proud of his record. Supports independent redistricting reform. Says we need to reform campaign finance, get rid of ALL outside money/SuperPACs, challenges Gillespie to just having the race between the two of them with no outside groups. Gillespie says he believes we can get things done, yet of course it’s HIS PARTY that has prevented us from getting stuff done since they took over the House in 2010. Look in the mirror Ed! Warner says he worries about partisan gridlock, has laid out specific solutions to fix that. Warner again emphasizes that Gillespie’s whole career has been as a partisan political operative, while he (Warner) always starts with a Republican partner.

UPDATE 7:26 pm: Question about over-the-counter contraceptives. Gillespie says over-the-counter would make the pill more affordable, would remove the question from constitutional questions and politics. Warner says there are stark differences between the two of them. Gillespie’s plan is a gimmick that would charge $600 out of pocket to women who currently have no co-payment. Warner says he trusts women, while Gillespie cheered the “Hobby Lobby” decision, is supported by the major anti-choice groups, won’t answer about Roe v Wade, hasn’t spoken out or stood up about invasive ultrasound legislation. Gillespie keeps blabbering about his non-existent “market-oriented” health care reform. Another big lie by Gillespie, claims that insurance premiums are skyrocketing, when in fact health care cost increases have SLOWED the past few years.

UPDATE 7:21 pm: Question on 250,000 Virginians supposedly will have to give up current health care policies. Warner says we need to “fix health care.” As for the 250,000 number, it’s completely made up. This is a state issue, there’s a bipartisan bill that would fix it. Would change ACA in a variety of ways, not relitigate it. Gillespie says he will put forward a “positive alternative” to the ACA (that should be, uh…interesting). Warner again says the 250,000 number is “made up,” and that other states have already fixed the problem, we ought to do that in Virginia. Will Ed lobby for it? Also, Ed has been promising his own health care plan since January, we still see nothing.

UPDATE 7:15 pm: Questioning on standing up to your party. Gillespie says he differs on mandatory minimum sentences, particularly on non-violent offenders. Says we should “ban the box” in job applications for certain crimes and certain jobs, as it only increases recidivism. Warner says Gillespie’s whole campaign is based on “this bogus charge” that Warner voted 97% of the time with President Obama. He says he supports offshore oil drilling, Keystone pipeline, tougher foreign policy, and that he is part of the “sensible center.” Gillespie says Warner’s press releases are bipartisan, but his floor votes are party line. Warner says that most of those votes are procedural and/or confirmation votes. For the moment, let’s just say that Warner and I disagree on energy policy. Another big lie by Gillespie, claims the “stimulus” failed, when in fact it succeeded (and would have succeeded more if it had been bigger).

UPDATE 7:08 pm: Question on the Congress shirking its duty on military action against ISIS. Warner says he mostly agrees with Sen. Kaine on this; Congress should be called back into session to debate this and vote. Warner says we need a more forceful response against Syria and Iraq, differs from President Obama on this. Gillespie says he also agrees with Sen. Kaine. Another big lie by Gillespie, blaming Warner for military budget cuts, when that was almost 100% the fault of Gillespie’s party – specifically, their sequestration idiocy. Warner says sequestration is “stupidity on steroids,” yet the alternative was defaulting on the nation’s debt. Says he laid out a comprehensive plan that would have avoided sequestration. Received the Navy’s highest civilian honor for his efforts on this. Warner says he’s not advocating combat troops but shouldn’t take the option off the table, Gillespie agrees.

UPDATE 7:07 pm: Question on marriage equality. Gillespie says marriage is between “one man and one woman,” and that states should make this decision. Claims the Supreme Court has ruled on this, which is actually false – they didn’t rule. Mark Warner says that unlike Gillespie, he supports marriage equality, also believes we should live in a Commonwealth that doesn’t discriminate. Gillespie tries to run away from his past support for a federal anti-gay-marriage amendment.

UPDATE 7:02 pm: Enron Ed’s opening statement. Lie #1: He claims he has an agenda for economic growth. In fact, his party drove the country into the ditch, while Democratic policies pulled it back out again. Lie #2: He claims prices are rising, when in fact inflation is close to zero. Lie #3: His trickle-down/voodoo-economics policies will actually make things much, much worse for hard-working Virginians.