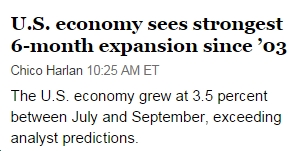 A few weeks ago, I wrote, Democratic Policies Save the Economy. Will Voters Reward Them for It on November 4? Now, with a just a few days until that election, and prospects for Democrats looking so-so at best, it looks like the answer to that question may very well be “no.” Of course, that would be a huge mistake, rewarding the very people whose policies were disastrous for the economy, and punishing the very people whose policies helped get us out of the ditch Republicans drove us into. Not to mention the fact that rewarding the very people who a) shut down the government and b) threatened the creditworthiness of the United States of America is like rewarding a child for really bad behavior (note: last I checked, all that does is encourage more really bad behavior) is the 180-degrees, polar opposite of what SHOULD happen. But “voters in their infinite wisdom” and all that, right? Anyway, see the comment below, currently the most recommended on the Washington Post article linked above, as it pretty much sums the situation up. Sad.

I see all these economic indicators rising as we crawl out of the 2008 recession, and all I can think of is voters are going to vote back in the very people who got us into this mess. Gas prices are hovering around $3 a gallon. Unemployment is below 6% (Romney promised it would be 6% in 2016). With a Congress that actually works with our President, we could have done far better. Do voters think the President can wave a magic wand and make all the messes go away? Even the Pope said God is not a magician. For a view of where Republican rule gets us (if you can’t remember the crash of 2008) Google “Kansas economy.”

What Virginians Want to Hear from Trump at Tonight’s Debate

Video: Senators Mark Warner, Tim Kaine Discuss Threats to the ACA, the Supreme Court, and What Can Be Done…Starting with ELECTING DEMOCRATS on 11/3