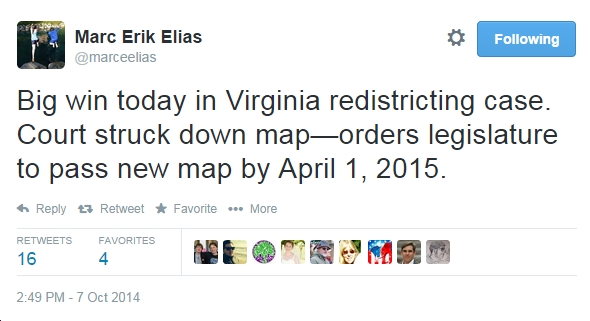 The reason I’d say this tweet by Marc Elias is credible is that Elias is the attorney “for the National Democratic Redistricting Trust, represent[ing] two Virginia voters in a lawsuit that accuses the General Assembly of ‘racial gerrymandering’ by improperly packing African-Americans into the state’s only black-majority congressional district to make adjacent districts safer for GOP incumbents.” If true, this is potentially excellent news, but stay tuned for more news from the Eastern District Court of Virginia.

UPDATE 3:51 pm: RTD reporter Graham Moomaw tweets:  “Court opinion on 3rd Congressional District: ‘constitutional rights have been injured by improper racial gerrymandering’.” Also: “Racial gerrymandering, even for remedial purposes, may balkanize us into competing racial factions” and “…it threatens to carry us further from the goal of a political system in which race no longer matters.”

UPDATE 3:58 pm: Here’s a link to the decision. Also see BREAKING: Federal Court Strikes Down One Of The Most Aggressive Gerrymanders In The Country.

UPDATE 4:02 pm: Apparently, all three judges (Liam O’Grady, Allison Kay Duncan and Robert E. Payne) were Republican appointees. The George HW Bush appointee (Payne) dissented, but the other two judges (O’Grady and Duncan) – both George W. Bush appointtes – held that “the maps that produced this result are unconstitutional and the legislature must ‘act within the next legislative session to draw a new congressional district plan.'”

UPDATE 4:06 pm: The Richmond Times Dispatch is up with its story, which notes, “Changes to the 3rd will trigger revisions elsewhere, possibly jeopardizing the GOP’s 8-3 advantage in the state’s House delegation.” Good!

UPDATE 4:29 pm:  ‏@KentonNgo tweets, “Note that judge ruling forces the VA maps back to General Assembly. Post-Puckett, the only hope for Dems is McAuliffe vetoes EVERYTHING.” Which he should. I also agree with Kenton on the following:

“Only reason McAuliffe would play ball and sign is flimsy incumbent protection. Literally any court map is better” and “Forbes retirement is most geographically convenient, of course”