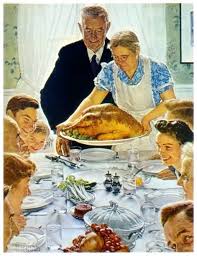 This piece has appeared this week in several of the newspapers in my conservative congressional District (VA-06).

Recently my wife and I attended a reunion of her first cousins (and their spouses). These cousins are the children of the children of a couple of Swedish immigrants who settled in Iowa to farm in the late 19th century.

What a wonderful family event! Just enough people to fill all the seats around a table not so big we couldn’t all converse together. In all our time together, there wasn’t a single hurtful word. Even the spouses, like me, were embraced in the family feeling, all glad to be together.

All these cousins — except for the two children of those Iowa farmers’ youngest child (which includes my wife) — are Republicans.

We know each other’s political orientations, and like a lot of other families in recent years, we know not to talk politics. (Even so, at a previous reunion two years ago, when I was running for Congress as the Democratic nominee, I was touched at how excited, even supportive, about my run they all seemed to be – family feeling seemingly trumping politics.)

But as we drove off afterwards, I thought of the troubling contrast I saw.

In the gathering of the cousins, our togetherness was imbued with a spirit of cooperation. There was a “barn-raising” spirit, as everyone just naturally pitched in together to get things done–things like feeding us all and cleaning things up.

But has there ever been a political party in America that was so little imbued with a cooperative spirit as the party they support? Never has “compromise” been treated as such a dirty word as by today’s Republican Party. Never has a party been less interested in working together to do the people’s business.

(Some have been led to believe that this pure obstructionism is justified by how “extreme” is the other party’s agenda. But there’s been nothing remotely extreme in the Democrats’ agenda, nothing that wouldn’t have been considered well within the American policy mainstream a generation ago  –or in many cases even two, or three generations — on issues like financial regulation, health care reform, cap and trade. Indeed, on many of these issues the measures proposed by the Democrats were originally Republican ideas. To be an American patriot, it seems to me, requires that one have some respect for the judgments of the American mainstream over the long era stretching from Eisenhower through Clinton.)

So how, I wondered, does it happen that these wonderfully cooperative people feel comfortable supporting a party whose animating spirit is so opposite the spirit of cooperation?

With respect to religion, all the cousins – again, except for the children of the farmers’ youngest child  –are Christians of the evangelical kind. And they walk their talk in some beautiful ways. (One of the cousins told me how he’d given away an asset of great value to a group that could make good use of it to do the Lord’s work because, he said, it didn’t really belong to him but to the Lord.) In our time together, I cannot recall a moment in which our group did not do unto one another as we would like done unto ourselves.

But has there ever been a political party in America whose conduct ran so counter to the Golden Rule as the party these good Christians support? That party has dealt with the “other” with unrelenting hostility and contempt. It has thwarted the other’s exercise of its duly elected powers  in a manner way more extreme than it complained bitterly about – e.g. on the confirmation of judges – when the shoe was on the other foot. Today’s Republican Party would never for a second think it acceptable to be treated as they’ve been treating the Democrats for years.

So, I wondered, how can these loving Christian people sitting around the table with us align themselves with a political party whose spirit is the opposite of what Jesus taught about how we should deal with the other?

A question of paramount importance for America today is: What has to happen for the spirit of such good people to get aligned with a force that represents their goodness in the American political system?

I confess that I do not know the answer. I’ve seen many things tried, and have tried a few myself, and have not seen anything work.

Whatever the answers to such questions, there is one thing I know: America can never be a healthy country again until the millions of truly good, decent, conservative people like these wonderful cousins of my wife’s have better aligned their political support with something that truly represents their own good spirit.

I argue in my “Press the Battle” series the need to “see the evil” and then to “call it out.” That is important as a way to awaken Liberal America to wake up from its blindness, and overcome it’s weakness, so that this destructive force that’s taken over the Republican Party can be effectively fought and defeated.

But essential to defeating that force is to drain away its power, which means to erode the support it is getting from millions of Americans. There is therefore also a need for the calling out of this destructive force to help the good people who are giving it their support to awaken from the illusions that lead them to mistake the evil for the good.

As for how that can be achieved, as I say in the piece above, I have seen a lot of things tried — and have tried a few myself — and admit I can’t say I’ve seen anything work.

But one possibly important ingredient in a successful strategy, I believe, might be to recognize the goodness in the people who have bought the lies and be clear that calling out the evil they support does not represent a wholesale condemnation of them.

This force has played perhaps on their vulnerabilities and their weaknesses. In some ways, it has also brought out the worst in its supporters.

But the real goodness of these people is in many instances by far the larger truth about them. And it is good to acknowledge that — not only so that we ourselves do not forget to respect and appreciate them in the round, but also as a way of addressing them that may make some unwelcome truths easier to take.