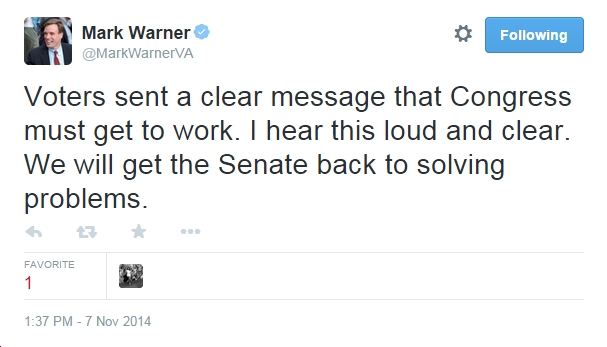 According to Sen. Mark Warner, now officially reelected with Ed Gillespie’s concession a few minutes ago, this is the message voters sent a few days ago: “Congress must get to work.” But is that really the case? A few points.

1. There’s really no way to know exactly what “message” voters were sending earlier this week. Exit polls indicated that this electorate was mostly concerned about the economy, but there was no specific course of action recommended. Clearly, voters are upset, anxious, angry, frustrated, etc., but again, no clear signs of where they want to go.

2. To the extent we can glean a “message” from the candidates voters elected on Tuesday, clearly the “message” would be that they want MORE of what the Republican Party has offered the past few years. That would be, in no particular order: shutting down the government, threatening to default on the national debt, refusing to compromise on anything, working 24/7 to make President Obama “fail,” opposing anything proposed by Dems even if they were originally Republican/conservative ideas (e.g., cap and trade, Obamacare – formerly known as “Romneycare” or the 1993/94 “Republican alternative to Hillarycare”), denying science, trying to trash the environment, letting our infrastructure fall apart by not funding it, refusing to invest in America, refusing to compromise on ways to reduce the deficit/debt, imposing “brain-dead” (in Warner’s own words) sequestration on the country, etc.

4. Of course, this is coming from the same guy who seriously believes that “the middle” is always the right answer. Let’s try this like we’re in math class. The “middle” of 0 and 10 is…yep, 5. the “middle” of 0 and 100 is…yep, 50. The “middle” of 0 and 1,000 is…yep, 500. Are those all the same answers? Obviously, not. Yet, according to Warner, they are all, by definition, the correct answers, because they are the “middle.” And while that might be true mathematically, it’s utterly nonsensical when it comes to society, politics, etc. Thus, if the correct answer used to be an exactly “middle” compromise between Dems at zero and Republicans at 10 (thus, 5 was the correct policy answer), after Republicans lurch to the far right, is 50 or 500 the correct policy answer, by definition? Does any of this make any sense whatsoever, other than being a political shtick Mark Warner has used for years now? If so, I can’t figure it out, any more than Warner could in 2008 when I asked him three times, in different ways, to explain what “radical centrism” was exactly. No answer.

5. The bottom line is that a Congress filled with more people like Joni Ernst, Cory Gardner, Barbara Comstock, and Dave Brat is most certainly NOT more likely to get anything good done for the American people. Now, it IS more likely to get some seriously horrendous s*** done (just look at the winning Republican candidates’ platforms – it’s a nightmare of climate science denial, personhood, tax cuts for the rich, taking healthcare away from people, you name it). Given that, I’d say the best we can hope for is that Congress does NOT get stuff done, other than the basic functions of government, over the next two years. Because if it does, it will only be bad for America, for the middle class, for working people, for the environment, you name it. No thanks.