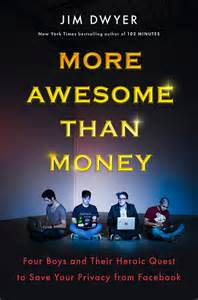 I just finished reading the fascinating new book More Awesome Than Money: Four Boys and Their Heroic Quest to Save Your Privacy from Facebook by Pulitzer Prize winner and New York Times reporter Jim Dwyer. The Wall Street Journal describes the book as the efforts of “four idealists frustrated with Facebook’s control over our personal data…to create an alternative,” and why they didn’t ultimately succeed. Other than being a fascinating story, with drama and even tragedy (specifically, the suicide of brilliant, charismatic co-founder Ilya Zhitomirskiy), the book covers important issues facing all of us in the age of social media, the “cloud,” etc.: privacy, the digital “Panopticon,” the profit motive vs. creating something socially beneficial, how promising technologies do or don’t end up getting funding to move forward, implications for society, even human identity itself. I make absolutely no pretensions to being an expert on any of this, just someone interested in the subject. So, I asked my friend Yosem Companys — who teaches high-technology entrepreneurship at Stanford University, runs social media for Stanford’s Program on Liberation Technology, and previously worked as consiglieri and CEO of Diaspora (with a crucial role to play in “More Awesome than Money”) – whether he would be willing to answer a few questions. He graciously agreed. Here’s the interview, edited for conciseness and clarity. Note: I’ve decided, due to the interview’s length (16 questions and answers), to break it up into four parts. Here are questions #1-#4.

Question #1: How would you explain what Diaspora was trying to accomplish? Do you believe this is widely understood?

Yosem Companys: People still don’t get that Diaspora was, and continues to be, something that is profoundly different from all dominant social networking sites: a DECENTRALIZED network. 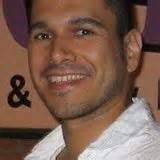 Yosem Companys: Well, I should say “public decentralization,” as Facebook privately decentralizes its servers to optimize your user experience, but publicly doesn’t allow you to run your own version of Facebook on your server. That is the fundamental difference between Diaspora and Facebook, and between Diaspora and any of the new “Facebook Killer” flavors of the month (such as Ello). On Diaspora you have the potential to control your own server — and, by extension, your own data — because Diaspora is simply an open-source software package that you download and install on your own server. Others can do the same, and then you connect to them and they connect to you via server-to-server connections, such that you could never see that data they choose to keep private from you, and vice versa (and no one else could either, including the government or malicious hackers, were that data encrypted). Of course, you could use a server running Diaspora that was set up by someone else the same way that you use a centralized social-networking site like Facebook, and that is indeed what most people do. But the revolutionary potential of Diaspora was in giving everyone the option to run their own server and customize the Diaspora software at will, something not possible on most other social-networking sites. Because the software is open source, you can both make modifications to the code and rest assured that open-source developers will patch any security holes, once discovered.

Question #3: How did Diaspora expect to be profitable?

Yosem Companys: There were plenty of Internet users who were interested in decentralization for privacy reasons and a significant number who were willing to pay for that service (on average about $20/mo. across a large swath of users, when I last did the research while at Diaspora), so a service like Diaspora could be profitable. But, despite all these data, [Diaspora co-founder Max Salzberg] would agree to pursue this strategy one day but then block it the next because, I think, he fundamentally believed that there was no money in privacy, partly because venture capitalists would regularly say that “there’s no money in privacy so we won’t invest.” But Max seems to have wrongly assumed that venture capitalists were right, despite all the data suggesting that they were, in fact, all wrong on this point. The proof is in two facts: one, that the tune of venture capitalists immediately changed when I revised Diaspora’s presentation to include a barrage of market research showing how much money one could make in the privacy space; and, two, that Reputation.com, one of the fastest-growing companies in Silicon Valley, wanted to buy Diaspora, once we started making that pitch.

One of the most surprising things is that the idea of providing personal servers at a monthly cost is still a potentially profitable business model, yet I don’t know of any new startup that has proposed it when it first appeared on the scene as a potential “Facebook killer.” Instead, each and every one of these startups are for-profit, but propose a centralized model that promises to be privacy friendly without a business model focused on privacy. The problem with this is that you are left to rely on the good will of the firm’s executive-management team to protect the privacy of your data.

Yosem Companys: First, let’s talk about what we mean by “popularity.” In Silicon Valley, popularity basically means that you are able to acquire lots of engaged users quickly. Thanks to the New York Times story, Diaspora quickly generated a massive demand, with hundreds of thousands of people being forced to wait to get an invitation. So Diaspora was quite popular.

The problem was that engagement was low, and our data suggested that this was due to Facebook’s network effect. The network effect is the phenomenon whereby a good or service becomes more valuable when more people use it. In other words, you use Facebook because all your friends use Facebook. If your friends were not on Facebook, you would not use Facebook because you would be alone on it. Most of Diaspora’s users could not persuade their friends and family to abandon Facebook for Diaspora, leaving Diaspora’s users to find themselves alone on this new site. So, while they were motivated to come to Diaspora via the privacy promise, they would not remain engaged on Diaspora because they had no one they knew on the site with whom they could interact.

Cory Booker to Campaign for Terry McAuliffe in Northern Virginia on Wednesday https://bluevirginia.us/2021/10/tuesday-news-yes-there-has-been-progress-on-climate-no-its-not-nearly-enough-the-indisputable-harm-caused-by-facebook-glenn-youngkin-closes-ugly-race-baiting-campaign-by-attacking#comment-5585084788

Tuesday News: “Yes, There Has Been Progress on Climate. No, It’s...