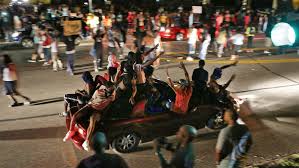 I don’t know enough about the facts of what happened that night in Ferguson to know with any certainty whether an indictment was called for or not. I’ve not explored the witness statements, and don’t know who or what to believe about what happened between Darrell Wilson and Mike Brown.

But I do know that the authorities handled the legal process about it it quite wrongly.

Their priority should have been to conduct the process in such a way as to maximize the chance that everyone would have confidence in its integrity and fairness. They didn’t even try.

That should have been their priority because taking care not to damage the larger society by exacerbating a major fault line is what has been most important all along.

Every effort should have been made to protect the society from further divisive wounding. The over-riding question for the county prosecutor, and for the Missouri governor, should have been: How can this be dealt with so that everyone feels assured that every good faith effort has been made to see that justice is done, whatever that may entail?

That would have meant bringing in a special prosecutor, of unquestioned integrity, in charge of the investigation and the grand jury process.

Even if the county prosecutor was indeed going to be fair, from the outset, he was not seen that way by the side most aggrieved. Leaving him in charge, pre-determined that, rightly or wrongly, a non-indictment would be seen as a failure of justice, and would unleash the pain and rage that we have seen.

And finally there were the leaks, all of which served the interests of the officer who shot Mike Brown.

All in all, the prosecutor and the Missouri governor failed to do what was required. They proceeded in a way that placed dynamite along a sensitive fault line, and now that community, that state, and our nation are unnecessarily wounded.

It didn’t have to be this way, indictment or no. Not if proper care had been taken.

We don’t need to know anything about the shooting to know that the officials in charge here failed to serve the public interest.